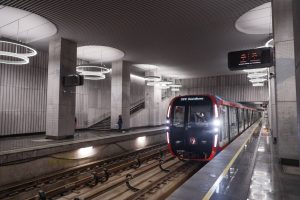 Moscow has completed the construction of another Big Circle Line section and it is expected that it will be put into operation by the end of this year.

At the same time, Moscow Metro has launched a test train along the new section from Mnyovniki to Davydkovo. According to the results of the tests, the section will be improved, and the engineering systems and devices are going to be adjusted.

The new stations will relieve the traffic at three other stations on two metro lines. On Line 3, the passenger traffic congestion will be reduced by 17 per cent at the Slavyanskiy Bulvar station and by 28 per cent at the Kuntsevskaya station, which is also a connection to the Line 4.

The new section will improve transport service more than 700 000 city residents. About 90 thousand citizens will have a metro station within walking distance for the first time and the travel time for residents will be reduced by approximately 40 per cent.

“The Big Circle Line is the most important project for the development of the capital’s transport, implemented with the personal participation of the Mayor of Moscow. The BCL will become the largest underground Metro circle line in the world,”Deputy Mayor for Transport Maksim Liksutov, said.

This Spring, Moscow Metro has opened a new Big Circle Line section between Savyolovskaya and Khoroshyovskaya stations and in May, the company announced that BCL tunnelling has been completed while ten more station will be opened. By the end of this year, Moscow Metro plans to open 70 per cent of the new circle line.

Currently, 12 stations are opened on the BCL and works are carried out to open the remaining stations. In 2018 the first section of the Big Circle Line with six new stations was opened. The entire line is expected to be completed by the end of 2022 when it will have a length of 70 km of new underground track, with 31 stations, including 19 with interchanges to other metro lines, 11 interchanges to regional trains and 4 interchanges with the Moscow Central Circle.