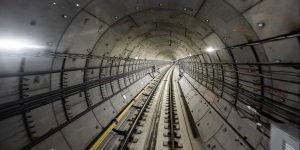 Moscow Municipality has announced that the Big Circle Line tunneling, and ten metro stations are expected to be completed by the end of the year.

The opening of the new stations will inspire the development of the Mnevnikovskaya floodplain, providing new transport routes for dwellers of the nearest districts, and connect the north and north-west of the city.

“Nine metro stations of the Big Circle Line (BCL) are planned to be put into operation by the end of 2021 when 70 per cent of the new circle will be opened for traffic,” Andrey Bochkarev, Deputy Moscow Mayor in the Government for Urban Planning Policy and Construction, said.

Together with the Terekhovo and Kuntsevskaya stations of the BCL western section, the Davydkovo station which is part of the south-western section can be opened. The workers also started mounting engineering systems, carrying out in situ concrete works, and finishing premises.

At the Terekhovo station, finishing is underway, and three of the six escalators have already been installed. In situ concrete works, office premises and the platform part finishing, engineering systems and electrical equipment mounting continue at Kuntsevskaya station.

In addition, by the end of the year, it is planned to complete the construction of six stations and the reconstruction of Kakhovskaya station on the Kakhovskaya line that entered comprehensive overhaul began in 2019. The line will become part of the Big Circle Line.

At the same time, from Mnevniki station to the reverse dead ends on Aminevskaya station, trains will go in tunnels made by new 10-meter tunneling shields.

By 2025, Moscow intends to open 30 new stations, in addition to the BCL commissioning. The municipality announced the plans to double the number of metro stations, of which 65 per cent are now completed.