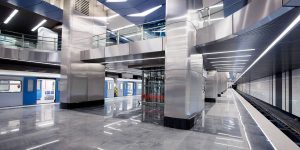 The Moscow Department of Transport announced that soon the construction of a new metro line will start as part of the large-scale expansion of city’s underground transport system.

The Biryulevskaya metro line length at the first stage will be 22.2 km, 10 stations and depot will be built. The line will pass through seven districts, which will improve transport services to the south and south-east of Moscow.

Biryulevskaya Line will be constructed as a radial branch of the metro system which will serve the Moscow districts. Thanks to it, nearly 280 thousand people will get a metro line near their home and will be able to travel around the city much faster and more conveniently.

According to the forecasts, Biryulevskaya metro line would be used by more than 150 thousand passengers a day in the first year after its launch. Therefore, it is expected that the roads will be unloaded by 11-25% in these areas.

The new metro line will provide connections to the “Line 2, the Big Circle Line (BCL), the Moscow Central Circle (MCC), future Line 5 of the Moscow Central Diameter and future Troitskaya line. With the metro line launch, some passengers will switch from private vehicles to the public transport,” Maksim Liksutov, the Deputy Mayor of Moscow for Transport said.

Last December, the Moscow Metro simultaneously launched 10 stations of the Big Circle Line. In total, since 2010 the network has opened 100 stations including the MCC, as well as 2 MCD lines. The Moscow authorities recently announced that by the end of this year the construction of the Big Circle Line will be completed with the transport services expected to start at the beginning of 2023.

In addition, as part of the public transport development plans, the city is constructing the Moscow Central Diametres system which by 2025 will be created by five lines covering 67 transport hubs.