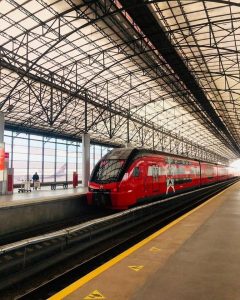 The construction work will be in two stages, with the first being expected to be completed in 2022, when the B and C terminals will have rail connection. Under this phase, RZD will build an 8-km railway link from the new Sheremetyevo-1 station, three receiving and departure tracks, double and single-track sections and two overpasses.

The construction work has already commenced on laying the subgrade and the construction of the first flyover, which is now about 90% complete, and the second flyover, which will house the passenger terminal complex, two platforms and ticket and turnstile halls. It will be connected to the existing elevated pedestrian crossing connecting terminal B with the car park.

“The first stage will see the construction of a railway line that will connect terminals B, C, D, E and F. This will allow the movement of electric trains between the North and South terminal complexes,” said Mikhail Glazkov, the head of Moscow Railways.

The completion of the first phase will allow shuttle trains to run from the Southern to the Northern Terminal Complex every 15 minutes.