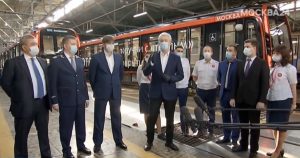 The trains will be manufactured by Transmashholding in the Moscow Region.

The design of the new train was chosen by the citizens under a public consultation held at the exhibition pavilion as well as online, on the social networks.

In September, the city has announced that it will acquire 1,300 Moskva-2020 metro cars operating the metro system, particularly the Circle, Big Circle and Kaluzhsko-Rizhskaya lines.

“We’ve started to renew the Metro’s rolling stock since 2010 and now we have one of the youngest rolling stock fleet among the world metro systems,” Sergey Sobyanin said at the official ceremony. 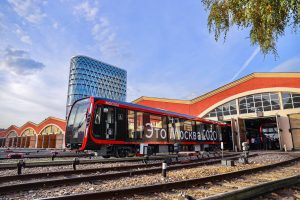 The design of Moskva-2020 trains is different from that of their predecessors.

The new features of the metro trains include a 15% increased door width from 140 cm to 160 cm that is essential for the traffic flow, as well as a 57% increase of the inter-car gangway from 102 cm to 160 cm. The new trains are equipped with an up-to-date information system, including larger above-door LCD displays with metro line diagrams, new overhead console-mounted data displays, a system of wall-mounted LCD displays and bigger touchscreens for plotting routes as well as a wall-mounted route-indicating screens outside the train. 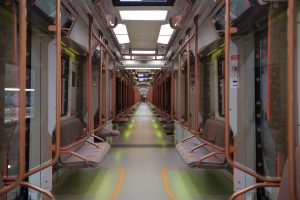 The new version of the metro train features automatic air filtration systems. Each car has two such installations built into the climate control system. These are compact high-tech devices using amalgam germicidal ultraviolet lamps, similar to those installed in specialised medical institutions.

Another feature of the train will help passengers to avoid traveling in the wrong direction as the name of the terminus station is visible outside the cars.

The door design is also changed. The door glass area will increase to 100 percent from the outside and to 82 percent from the inside. The Moskva-2019 train’s glass door area was 47 percent. Larger glass area on the doors will create the impression of more open space. Instead of plug doors, the new carriages will have sliding doors with more reliable servo-drives. Door wings will have bright LED strips to indicate that the doors are opening or closing. A new system will prevent passengers from getting trapped when the doors are closing. 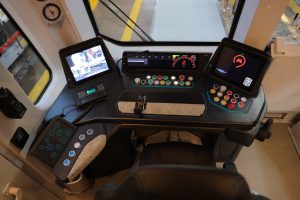