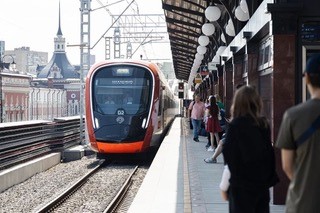 The reconstruction of underground passages under Leningradsky, Yaroslavsky and Kazansky railway stations has been already completed. The interchange time between the metro, railway stations and the walking time between Komsomolskaya Square and Novokolozanskaya Street was reduced by 30% due to the new passages. The traffic scheme was also reorganized with an increased traffic speed of 7%.

A new suburban station for the MCD-2 and the future MCD-4 is being built as part of the transport hub. Its total area will be more than 4.5 thousand m². During construction, the exterior is also taken into account. The modern architecture blends in harmoniously with the historical style of the Three Stations Square. During the works, the pavilion built in 1896 was carefully preserved.

The works on the Three Stations Square transport hub are scheduled to be completed in spring 2023. “By 2023, it [the station] will include MCD-4 station, so we are modernising the infrastructure here in advance and creating capacity reserves for decades to come. Also, in the future, we plan to launch the interchange to the currently designed Yaroslavsko-Paveletsky MCD-5 and, in the future, a new station for trains of the Moscow-St.Petersburg High-Speed Rail system. Thus, this transport hub, with passenger traffic of 600 thousand passengers per weekday in 2027, will be the largest in Russia,” Maksim Liksutov, the Deputy Mayor of Moscow for Transport, said.