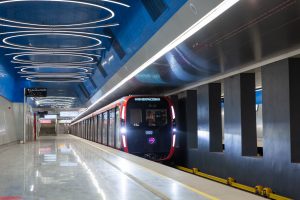 In the next three years, Moscow Metro will purchase over 1,300 new-generation Moskva-2020 carriages which will form  fleet of 162 eight-car trainsets, which will account for over 80 percent of the total metro train fleet.

This was announced by the Moscow Mayor Sergei Sobyanin while presenting the new metro train version at the Mitino maintenance facility. “We are unveiling the latest version, Moskva-2020, whose specifications are largely better than those of the previous trains,” Sobyanin said.

The new trains will serve the metro’s Circle, Big Circle and Kaluzhsko-Rizhskaya lines.

The design of Moskva-2020 trains differs from that of their predecessors, the Moskva trains The new features of the metro trains include a 15% increased door width from 140 cm to 160 cm that is essential for the traffic flow, as well as a 57% increase of the inter-car gangway from 102 cm to 160 cm. The new trains will be equipped with an up-to-date information system, including larger above-door LCD displays with metro line diagrams, new overhead console-mounted data displays, a system of wall-mounted LCD displays and bigger touchscreens for plotting routes as well as a wall-mounted route-indicating screens outside the train. 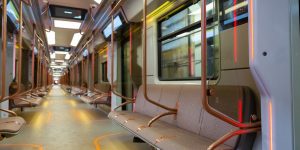 For the first time in the Moscow Metro’s history, the name of the route’s terminus will be displayed on the sides of carriages. This will help passengers avoid traveling in the wrong direction, a common occurrence.

The number of USB outputs for recharging mobile devices will increase five-fold, from 72 to 368, for every carriage train with each seat having its own charger.

The noise levels will decrease by 15 percent, compared to the older trains.

The door design will also change. Instead of plug doors, the new carriages will have sliding doors with more reliable servo-drives. Door wings will have bright LED strips to indicate that the doors are opening or closing. A new system will prevent passengers from getting trapped when the doors are closing.

The driver’s cabin access will be made using individual access card that also activates the comprehensive control and traffic safety system. This system is safer and more convenient. The new-generation train’s control console is more ergonomic and has almost two times fewer buttons thanks to wide-format touchscreen monitors.