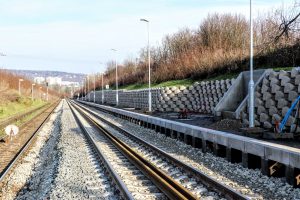 The railway infrastructure manager of the Czech Republic, Správa železnic, announced the tender for the reconstruction and double track construction of the line section from Pardubice-Rosice nad Labem to Stéblová, on the Eastern Bohemia rail line linking Pardubice and Hradec Králové.

Its main benefit will be the construction of the second track, including the bridge over the Elbe in Pardubice.

The total value of the project is estimated at CZK 2.6 billion (EUR 98.57 million) and the construction works are expected to be completed at the end of 2023.

The planned project follows the already started reconstruction of the Pardubice main station. The 7.5 km long section will be modernised and will benefit the second track. The original single-track bridge over the Elbe will be replaced by new one, with two tracks. At the Pardubice-Rosice nad Labem railway station, the track sections will be modified for the connection of double-track line sections. The configuration of the track will be also changed due to the creation of new platforms. The connection between the outer and island platform will be through a new pedestrian tunnel.

Under the project, the Pardubice-Semtín stop will also undergo modernisation and it will have two new outer platforms and a platform shelter. The main change will be the removal of the current foot level crossing and its replacement by a pedestrian tunnel. A new stop will be created at the railway level crossing in Stéblová.

Hradec Králové is a rail intersection from from Prague, Liberec, Letohrad, Pardubice and the commuter railway line from Jičín.