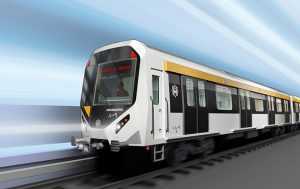 The Egyptian National Authority for Tunnels (NAT) signed a contract with Mitsubishi Corporation and Kinki Sharyo to deliver 184 metro cars for the Phase 1 of Cairo Metro Line 4. The total amount under this contract, in which MC shall serve as the prime contractor, is approximately PJY 40 billion (USD 350.14 million).

Under the terms of the contract, Mitsubishi will oversee the project’s schedule and day-to-day operations and Kinki Sharyo will supply the rolling stock.

The metro cars supplied by Kinki Sharyo will be manufactured mainly with Japanese components and delivered in stages, beginning in 2025 and concluding in 2028.

Funded through ODA loans from the Japan International Cooperation Agency (JICA), Phase 1 of Cairo Metro Line 4 project including New CP412 will be expected to take advantage of advanced railway technologies developed in Japan.

In November 2020, a JPY 90 billion (USD 787.8 million) contract was signed with the Egyptian government for the delivery of the railway systems, track and depot works package (CP411) for Phase 1. The contract was awarded to a consortium comprising Mitsubishi Corporation and Orascom Construction. MC will supply the equipment necessary to build the railway systems and be responsible for related administrative work, while Orascom will handle the project’s civil engineering work and construction of the train operation control center and other facilities.

Both contracts are yen-loan projects in Egypt under JICA’s STEP (Special Terms for Economic Partnership) programme.

The first phase of Cairo Metro Line 4 will be 19 km-long served by 16 stations which will link central Cairo to the Giza Pyramid Complex in Southwest Greater Cairo.

Not only is Line 4 expected to help ease Greater Cairo’s traffic congestion. The city is expanding and develops its metro system and the rolling stock.

Recently, a EUR 180 million contract was signed with CAF for the modernisation of metro trains running on the Line 1. This project will be implemented with Mitsubishi as is the manufacturer of the existing fleet.