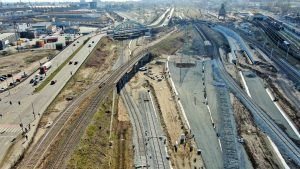 The Gdynia and Gdańsk rail project reached a new milestone as at Gdynia the works have reached their halfway and due to the completion of the works at Gdańsk the freight trains are allowed to arrive at the quays along the new and electrified tracks.

PKP Polish Railway Lines is carrying out the implementation of the project to improve the conditions for transporting goods to Baltic ports.

“Implemented by PKP Polskie Linie Kolejowe, the projects improving railway access to Polish seaports, increase their potential, which contributes to the development of the country’s economy. The ecological aspect is important, because cargo transport using modern railways is an alternative to road transport. The works carried out in the Tri-City effectively use EU funds from the CEF,” Andrzej Bittel, the secretary of state at the Ministry of Infrastructure, said.

In 2019, the Polish rail infrastructure manager has signed the construction contracts to implement the Gdynia and Gdańsk rail project covering the reconstruction of 70 km tracks at Gdańsk Port and 115 km tracks in Gdynia Port.

The project involves the construction of new tracks and the modernisation of the existing rail infrastructure, as well as the installation of modern control system from the LCS control room.

From the new Local Control Centre at Gdynia Port, which was commissioned in March 2022, trains run to the quays of the Gdynia port. During the day, the traffic dispatchers ensure efficient and safe journeys of 50 trains entering and leaving the port with loads and during approximately 230 maneuvering rides. The work of the staff is supported by modern equipment and computer systems. Information on the situation on the access tracks to the port and at the cargo station is viewed on monitors. Computer devices enable maneuvering work, supervision over the composition and preparation of trains for travel. From the new Gdynia Port P1 control room there is maneuvering traffic of trains with loads (about 100 trains a day).

The improving rail access project at Gdynia is 50% completed with nearly 70 km of new tracks and 166 turnouts being built. Works are now entering a new phase. New tracks are being laid, turnouts are installed and overhead contact line components are installed. Temporary connections between the tracks allow the work to be carried out smoothly while maintaining constant access by trains to the tracks in the port area. At the Gdynia Port station, the heating network is ready, the water, sewage and gas network is being reconstructed. 11 underground storage reservoirs are ready and two more are under construction.

Two new railway viaducts are being built to facilitate access to the port. On the first of them, on which four tracks will be laid, retaining walls are concreted, as well as reinforcement and concreting of subsequent parts of the structure of the facility. On the second, longer one with a single track the structure of abutments and supports is created. The bridge over the Chylonka River was renovated. The contract is scheduled to be completed in the second half of 2023.

The main works of the project “Improvement of railway access infrastructure to the port of Gdańsk” have been completed. Trains run on modernised tracks with a new catenary within the Gdańsk Zaspa Towarowa, Gdańsk Northern Port, Gdańsk Kaszubski Channel, Gdańsk Wiślany stations and on the Gdańsk Główny – Gdańsk Zaspa Towarowa and Gdańsk Zaspa Towarowa – Gdańsk Wiślany lines (lines 227, 249 and 722). The contractor built 72 km of new tracks and 233 turnouts. From December 2021, drivers use the new road overpass along the Ku Ujściu road. The 100-metre facility replaced the rail crossing between Gdańsk Kanał Kaszubski and Gdańsk Northern Port stations, where the road and rail traffic safety is improved. The implementation of the project ensured efficient access of trains and cars to the Gdańsk port.

The improvement of rail access to the port of Gdańsk also includes the modernization of 13 rail-road crossings and the reconstruction of engineering structures such as three bridges, two viaducts and 18 culverts. The extension of the Local Control Centre with new railway traffic control devices as well as telecommunication devices and systems ensure efficient and safe train traffic. The completion of all works is planned for the middle of this year.

The Gdynia and Gdańsk rail project aim at improving access to these Baltic ports is financed by the EU through the Connecting Europe Facility (CEF) which covered 40% of the PLK’s PLN 2.6 billion (EUR 562.13 million) investment to improve the connection of the quays of the two ports with the railway network. The project will allow longer (of even 750-metre) and havier freight trains with an axle load of 221 kN.

“Investments improving rail access to the Tri-City seaports increase the possibilities of transporting cargo by rail. Longer and heavier trains travel to the quays, which therefore carry more goods. One of the priorities of PKP Polskie Linie Kolejowe is to ensure efficient and safe transport of goods by rail, the most environmentally friendly means of transport,” Arnold Bresch, member of the Management Board of PKP Polskie Linie Kolejowe said.