The Middle East has constantly been a war zone in recent history, with short periods of armistice, which can hardly be called “peace”. For some time now, however, we have been going precisely through such a period in the area, a good time to rebuild the railway infrastructure, but also to implement new projects that are in the pipeline. New railway plans in Middle East. 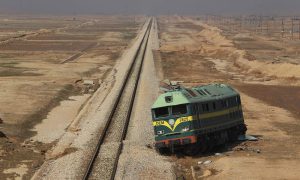 Whether it is Syria, Iran or Afghanistan, the first thing that comes to mind is war. Israel is also in a permanent state of war, even if not officially. Declared armed or guerrilla conflicts have destroyed entire regions in these countries, and some cities have simply been wiped off the face of the earth. Obviously, the transport infrastructure, including the railway one, has also taken a hard blow.

Now that hostilities in the area have ceased or have at least temporarily come to an end, governments in Middle Eastern countries are taking the first steps towards rebuilding railway networks and resuming freight and passenger traffic. As is the case in Africa, Chinese investments are making their way here, too, as the communist authorities in Beijing want to expand their sphere of influence. The Russians or the Iranians are also in the picture.

In Syria, the rail main line linking the capital city of Damascus to the city of Aleppo is in the final phase of rehabilitation, according to the Ministry of Transport. After reclaiming large territories in recent years, in February 2020 the regime reopened this strategic 400 km axis which had been closed in 2012 due to armed conflicts.

Even though the railway project seems to be in a state of suspense, with government announcements often contradictory, the Syrian state has still managed to put back into circulation some rail sections for freight and passenger traffic, such as Homs-Damascus or Hama-Damascus, which have been severely affected by war. Passenger travel and freight transport resumed in 2015 between the coastal cities of Latakia and Tartous, which are far away from the main conflict areas, within 80 km. Then, in 2020, rail freight transport resumed on the 309 km line connecting the port of Tartous and the city of al-Sabinah, west of Ghouta province, south of Damascus.

In Syria, Iranian, Russian and Chinese companies are up against each other

There is peace for now, but the country is facing an unprecedented economic crisis, a situation in which it is difficult to see a new “offensive” to have this sector rehabilitated by the state without foreign investment. Western sanctions that paralyse Damascus further limit investor choice, bringing Moscow and Tehran, allies of the regime, in pole position.

Iranian and Russian companies have expressed interest in recent years in getting involved in Syrian railway projects, which are strategic to strengthen their influence in the region. In July 2019, Tehran announced that a major project to connect the port of Khomeyni, located on the Iranian side of the Persian Gulf, to the port of Latakia, was being planned. The project will allow Iran to facilitate the transport of its militia and weapons. However, given the pressure from the Americans and faced with Israeli bombing, the investment seems rather likely to end in failure.

As for the Russians, at the end of 2019 there were talks with the Stroytransgaz construction company aiming at ​​linking the port of Tartous (leased to the company for a period of 49 years) with a railway through Iraq.

But this competition between investors could end up with a third party being the winner, namely China. According to information published in the pro-government press in Damascus, a Chinese state-owned company recently made an offer to Syria for a railway project that aims to connect the country’s capital city with its suburbs with four railway lines.

But Bashar al-Assad’s ambitions are much higher when it comes to collaborating with Beijing, more precisely he sets out to put Syria on the new Silk Road, China’s giant project launched in 2013, which provides for investment in transport infrastructure in 70 countries. In an interview given at the end of 2019 to the Chinese state television, the Syrian dictator did not hide his desire and intention to get his country in on this project.

In parallel, the Syrian General Railway Company and its Iraqi counterpart signed a cooperation agreement in November 2020 for the transport of freight by rail – raw materials and industrial products from Syrian ports to Iraq and vice versa. In its turn, the second Syrian public railway company, Hijaz, has announced its intention to repair the Amman-Damascus line. It is basically a repeat of an announcement that had already been made shortly after the reopening of the Nassib border crossing with Jordan on October 15th 2018. 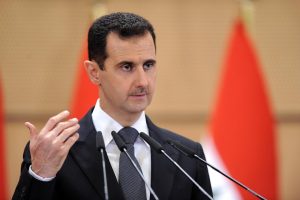 The Syrian railway network is over 2,500 kilometres long and is one of the best performing in the Middle East, but it has been seriously damaged in the last ten years. The general manager of the Damascus-based railway company, Nagib al-Fares, has recently estimated the losses at almost USD 1.7 billion.

For the Damascus regime, the re-launch of rail transport is crucial for its policy of rebuilding the country. After managing to regain control of two-thirds of the territory, thanks to his allies, dictator Bashar al-Assad made reconstruction his top priority. With an economy that has reached rock bottom, the regime relies heavily on this mode of transport to revive domestic and foreign trade. But “building up” the image of the Syrian state is also at stake, as commented by international analysts. For more than a century, trains have travelled across Syria for hundreds of kilometres, carrying cargo and passengers alike, before the civil war put wagons in depots in 2012. One month after the fall of Aleppo, the regime in Damascus was posting photographs and videos of a train crossing the devastated city with people on board who would hold up portraits of Bashar al-Assad. A few months later, a Swiss-made steam locomotive covered in Syrian flags made its first journey since the start of the war between Damascus and al-Zabadani, near the Lebanese border.

Rail link between Iran and Afghanistan 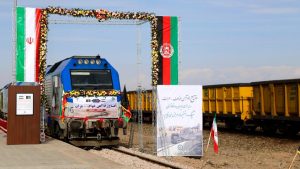 In Iran, subject to American and European sanctions due to its nuclear capacity development programme, railway projects have been taking shape lately as well.

An Iranian freight train carrying agricultural goods entered a western Afghan province in early December 2020, as the two countries marked the opening of their first shared rail network. The rails connect the Iranian city of Khaf with the Afghan city of Rozanak, about 150 kilometres away, but the line is scheduled to be extended all the way to Herat, Afghanistan’s third largest city.

The USD 75 million project began in 2007, with Iran financing construction on both sides of the border as part of its development assistance to Afghanistan. Afghan President, Ashraf Ghani addressed the audience at the inauguration ceremony via a video link speech and welcomed the project describing it as “an important step towards economic recovery and development for both countries.”

He called the railway “a precious gift from Iran” that would help restore the Silk Road, an old trade route that brought prosperity in Asia. One freight train left each end of the line. The project is a gateway to Europe for Afghanistan, said Iranian President Hassan Rouhani. “I see the prosperity of Iran and Afghanistan in this railway,” he said speaking from Tehran. “The development, security and stability of Afghanistan contribute to development, security and stability in Iran and the entire region,” he said, adding that Iran has managed to build the line, despite sanctions imposed by the Washington administration run at the time by Donald Trump.

Once completed, the 225 km long railway network will contribute to the transport of six million tonnes of freight and one million passengers annually, officials in both states said. The Khaf-Herat railway line will later be connected to the railway networks in Central Asia and China, according to assurances that the officials have given. Decades of war and neglect have destroyed Afghanistan’s infrastructure, making roads, bridges and railways almost impassable. But despite the worsening security situation, efforts to rebuild roads and rail networks have always been a top priority for the Afghan Government and the donor community. 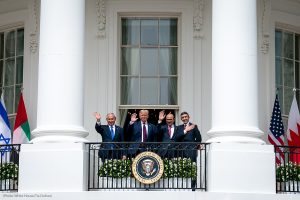 In mid-September 2020, a new hope for peace emerged in the Middle East. Israel, the United Arab Emirates and Bahrain signed agreements to normalise relationships in a ceremony that took place on the lawn of the White House, in the presence of the then US President Donald Trump.

The Israeli Prime Minister signed bilateral agreements at the White House with UAE Foreign Minister Sheikh Abdallah bin Zayed Al-Nahyan and Bahrain’s Abdel Latif al-Zayani. The three officials and US President Donald Trump also signed a joint statement. In the context of the agreements signed in Washington, the Minister of Foreign Affairs of Bahrain, Abdellatif al-Zayani, paid an official visit to Israel for the first time.

In this new context, two months later came the news that Israel and the European Union planned to build a railway line between the Mediterranean countries and the Persian Gulf, called the “Regional peace railway”. The Jewish state and the European Union have launched talks on the possible construction of a new railway economic corridor between certain states bordering the Mediterranean and the Persian Gulf countries, according to the Israeli Ministry of Finance and the Central Bank of Israel.

This project, which aims to deepen economic cooperation, provides for the construction of a “Regional peace railway” in an attempt to boost the economies of Israel, Jordan, the Palestinian National Authority, Saudi Arabia and the Persian Gulf states. This new rail link will be a faster, safer and cheaper way to make the connection between East and West, compared to current trade routes, in the opinion of the Central Bank of Israel. These are the most recent railway plans in Middle East.