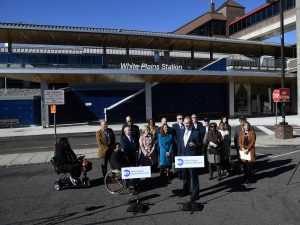 The Governor of New York Kathy Hochul marked the completion of the full-scale renewal of White Plains station which has been transformed into a state-of-the art complex.

The USD 95 million project started in 2018 as part of Metro-North’s station improvement initiative to bring a more customer friendly atmosphere for commuters.

“Upgrading our transport hubs to meet the demands of the 21st century is fueling the economic comeback that we need today and will help keep New York’s economy competitive in the future. The renovated station in White Plains is a prime example of this commitment and with these enhancements now complete, commuters and visitors will have access to a safer, world-class travel experience,” Governor Hochul said.

The project included a refurbishment of the station’s main entrance at the station plaza, the Main Street and the Hamilton Avenue entrances, and the Mott Street tunnel. The station was remodeled to bring an updated, modern aesthetic to the station, including updated signage, glass entrances, wood soffits, a widened main lobby, improved lighting and upgraded HVAC system. The side and island platforms were extended to increase capacity as more commuters return to the system.

At the station, a new elevator has been installed that is fully compliant with the Americans with Disabilities Act. The elevator leads from the main lobby to aside platform generally used for northbound arrivals. “A central priority of this renovation was to enhance accessibility. For wheelchair users like myself, seniors with mobility disabilities, parents with children in strollers and so many others, it can be difficult to get around, but not at White Plains. This should serve as a model for all MTA stations as we strive for system-wide accessibility,” Quemuel Arroyo, MTA Chief Accessibility Officer, said.

The project also included the construction of new staircases with an automatic system to melt snow and ice as it falls, helping to prevent slippery surfaces during the inclement weather. A new platform canopies with wood ceilings, and LED lighting to match the upgraded aesthetic of the main lobby have also been installed.

The waiting room on the island platform was remodeled with expanded space, glass-enclosures with new interior station wall panels, wood ceiling and fixtures. The ticket office, restrooms and concession spaces were also remodeled to fit the station’s new feel. Digital screens were installed in addition to better heating and cooling control so commuters can comfortably wait for their train.

The station provides passengers Wi-Fi and cellular connectivity, USB chargers on benches and digital screens were added on platforms to provide convenient access to train information.

White Plains station serves more than 12,000 commuters on pre-pandemic weekday. The station is a hub for Harlem Line commuters and bus connections.