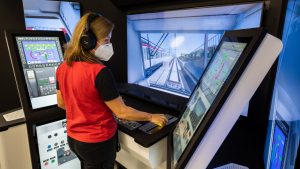 It also includes a full-scale reproduction of the driver’s cabin of the Alstom Metropolis trains currently running on Barcelona Metro 9 and 10 lines, the only driverless lines in operation in Spain.

With this new technology, Transports Metropolitans de Barcelona will train its technicians teams on the rapid and efficient resolution of incidents on automatic lines, where the reaction time is key to preventing an impact to service.

Throughout the trainings, instructors will be able to simulate traffic conditions and real situations, programming all kinds of variables, such as train breakdowns, signalling conditions, environmental incidents, and even the density of passengers.

The driver simulator for Barcelona metro will allow technicians to practice the skills required to solve incidents and maintain railway safety, without the need to stop traffic or perform power cuts on the metro lines. The tool will faithfully reproduce specific sections of the railway network with exact replicas of stations, junctions, signals, cables, points of interest, etc.

In 2019, the two companies have signed a contract for the development of the simulator.

With Barcelona Metro, Alstom has a close collaboration. Last year, the French manufacturer signed a EUR 260 million contract for the design, construction and supply 42 five-car Metropolis trainsets to replace the existing fleet of the Line 1 and Line 3. The first two prototypes for the two lines would be delivered in one year. Within 2 years, Alstom will deliver all 18 trains for Line 3 and within two-and-a-half years, the remaining 24 trains that will operate the Line 1.