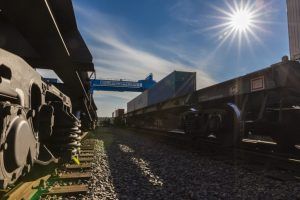 HHLA intermodal company Metrans has taken over the company CL Europort Malaszewicze and the logistics centre of the same name in the Polish town of Malaszewicze.

The location is near the Belarusian border and is a hub for freight traffic within Central and Eastern Europe and also for Europe-Asia transport. Another strategic partnership was concluded with the rail operator Eurotrans.

The company CL Europort operates the logistics centre of the same name in Malaszewicze in eastern Poland. The location is only 4 km from the Terespol railway crossing and 8 km from the Koroszczyn road crossing. The rail connection is part of the second pan-European transport corridor linking Berlin, Warsaw, Minsk and Moscow. The Western European and Russian railway systems meet in Malaszewicze, so it is possible to change the gauge from 1,520 mm to 1,435 mm. The rail operator Eurotrans, with which Metrans has a strategic partnership, is also active on this transport axis.

Europort LLC has its own container terminal in Malaszewicze with a capacity of 5,000 TEUs. The terminal has also rail connections to the E-20 mainline and CE20 for combined transport, connecting the railway and road transport.

“Malaszewicze represents a bridge between the EU member states, Russia and even China. Our idea for the hub terminal has proven itself and the new terminal will perfectly complement our intermodal network. A large portion of the international rail transport that goes from here to China already goes via Malaszewicze. We also want to grow further in this segment through our strategic cooperation with Eurotrans,” Peter Kiss, Chairman of the Executive Board of the Metrans Group said.

With its rail transport on Belarusian and Russian routes, Eurotrans provides an ideal expansion of the Metrans network. Metrans will use a part of Eurotrans’s capacity to offer new rail products to and from Brest and further east, and to guarantee the quality of existing services.

Europort is surrounded by other terminals such as Raniewo, Kowalewo, Wolka, Podsędków and Malaszewicze. The last one is owned by PKP Group and is in modernisation phase. Recently, PKP Cargo Terminale signed a contract for the expansion of the facility.