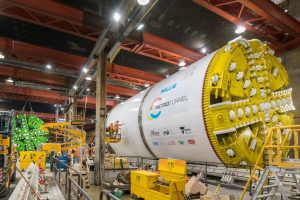 The last two Melbourne Metro TBMs are in the ground to dig 1.7 km tunnel from Anzac station to South Yarra.

“Just as we’re facing an unprecedented health challenge, we’re facing an unprecedented economic challenge too. Our Big Build [workforce] will be vital as we recover after the pandemic has passed. The Metro Tunnel team are doing an amazing job finding practical, safe ways of working, so we can continue building this urgently needed project in challenging circumstances,” said Minister for Transport Infrastructure Jacinta Allan.

The components of the two Melbourne Metro TBMs, Millie and Alice, began arriving onsite in late 2019. Assembly started in January and both have undergone comprehensive commissioning and testing.

The construction on Anzac station, which will be 300 metres long and sit 22 metres below St Kilda Road, is continuing. The first two TBMs, Joan and Meg, broke through at the western tunnel entrance in February, with the pair travelling 1.2 km to complete the first section of the tunnel.

They were then returned to Arden station by trucking parts back to the site and pulling the gantries through the tunnel, where they began their 1.8 km journey to Parkville Station.

Progress is recorded across all Melbourne metro sites, with the excavation of the station box at Parkville completed in April.

Three roadheaders are excavating deep under Swanston and Flinders streets to construct the central cavern of Town Hall Station, and tunnelling of the twin tunnels in the CBD, at the site of the new State Library Station, will get underway mid-year.

The Victorian Government is working closely with our Big Build workforce, construction partners and unions to ensure works on our vital road and rail projects can continue safely

Melbourne metro project envisages the construction of 9 km rail tunnels and 5 new underground stations. It is also including the upgrades of Sunbury and Cranbourne/Pakenham lines with the  next-generation high capacity signalling to allow more trains to run more often and more reliably.