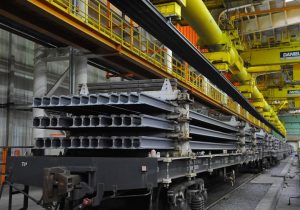 Mechel railway products sales, which include rails and sections for wagon building, recorded increases which contributed to company’s dynamic results during the first four months of 2020.

“Our facilities continue to increase output and sales of railway products and develop exports even as the pandemic forced economic activity into a recession. This is proof of our products’ high quality and market demand,” Mechel CEO, Oleg Korzhov, said.

Rail exports have more than doubled during this period.

Chelyabinsk Metallurgical Plant has signed its first contract with Georgian Railways and has began shipping while has been signed an agreement with Belarus Railways. The plant also signed a contract with Uzbekistan Railways for Z-sections which are used in wagon building.

Apart from Moscow, other Russian cities that are either constructing or repairing their metro systems, such as Kazan and Saint-Petersburg, announced their interest in the plant’s output.

In May, the plant received a certificate of compliance for its conductor rails from the voluntary wagon building product certification agency.

Recently, Mechel has announced the sale of its Elga Coal Complex remaining shares which includes the coal railway line linking the deposit with Baikal-Amur Mainline.