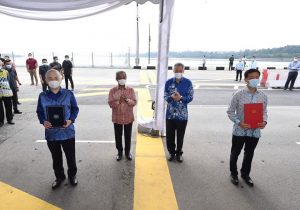 The prime minister of Singapore, Lee Hsien Loong, and its Malaysian counterpart, Muhyiddin Yassin, attended to a bilateral ceremony to symbolise the signing of the agreement on Johor Bahru-Singapore rapid transit system (RTS) linking the two countries.

The project has been suspended since April 2019 because “political transitions in Malaysia and COVID-19 pandemic”, Lee Hsien Loong said.

After many months of negotiations, the two sides decided to complete the revised agreements and the work can now at last resume.

After three times delayed, Malaysia and Singapore finally agreed on several changes including the construction of a new depot in Wadi Hana in Johor Bahru, Malaysia. Following this decision, the link will no longer use the existing Thomson-East Coast Line Mandai depot. The RTS Link will be a standalone light rail system, instead of leveraging the Singapore’s Thomson-East Coast Line, as in the original plan which proposed the use of the same four line’s core systems – the  trains, signalling system, communications system, and Integrated Supervisory Control System.

The commercial operation is expected to start in 2026. Initially, the railway link was scheduled to be opened in 2024.

Each government separately appointed an infrastructure company (InfraCo) to fund, build, own, maintain and renew the civil infrastructure and stations in its territory up to the international boundary. Malaysia has changed its InfraCo from Prasarana Malaysia Berhad to Malaysia Rapid Transit SystemBhd. The Land Transport Authority of Singapore remains as Singapore’s InfraCo.

“The approval of the relation of the implementation of the RTS project is also proof of a very close two-way relationship between Malaysia and Singapore, as well as continuous efforts to strengthen the cooperation of both countries,” Malaysia’s prime minister said.

The railway connection will improve the people-to-people connectivity from Singapore to Johor, in southern Malaysia currently linked to Singapore by a Causeway, where the officially ceremony was held.

The 4 km-long railway connection will cross the Straits of Johor via a 25m-high bridge between Singapore terminus in Woodlands North and Bukit Chagar station in Johor Bahru.

The project will be implemented into two phases. The first one will start at the beginning of 2021 and will be completed in 2024 involving the construction of the civil structures. In 2025-2026, major construction works will be performed for the signalling and telecommunication systems and the necessary tests will be carried out.

The RTS link “will improve the connectivity and people-to-people ties between Singapore and Johor. Once operational, it will ease congestion on the Causeway which has connected our two countries for almost a hundred years,” Singapore prime minister said.

The Johor Bahru-Singapore rail connection will have the capacity to carry up to 10,000 passengers per hour per direction, resulting in an additional capacity of 60,000 users crossing the Causeway during peak hours.