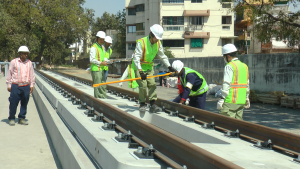 USD 4.6 billion is the value of the offer submitted by Larsen & Toubro.

The tender covers about 47% of total alignment of 508 km, between Vapi, in Zaroli Village at Maharashtra- Gujarat border, and Vadodara in the state of Gujarat. This includes the design and construction 237 km line and four stations – Vapi, Billimora, Surat and Bharuch, and the Surat depot.

The technical bids for this tender were opened on 23 September 2020 and in less than one month the financial bids have also been opened, after rigorous evaluation of the technical offers.

It is expected that the project will create more than 90,000 direct and indirect jobs during construction phase. Not just the employment market but production and manufacturing market are also expected to gain with the project. The cement, steel and the structural steel that will be used in the construction will be produced in India. In addition to this, large construction machinery is another market that will gain big time through the project.

The Mumbai-Ahmedabad high-speed rail project consists of the construction of a 508 km corridor served by 12 stations. The line will allow trains to run at speeds of 320 km/h, providing a travel time of 2 hours. It is expected that during the first years of operation, the line will be used by 17,900 passengers per day per direction.

As part of the project, this year NHSRCL has organised three online pre-bid meeting for the construction of 14 bridges.

In August, the authority has invited bids for the design and construction of about 18 km of viaduct between Anand and Sabarmati including HSR stations at Ahmedabad and Sabarmati. The alignment also has 31 crossing bridges including six steel truss bridges.