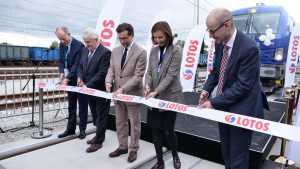 “We are pleased that the locomotive will soon join our resources. The purchase of the multi-system locomotive in the framework of a project carried out in cooperation with CUPT, and co-financed by EU funds, means new prospects for Lotos Kolej, allowing for comprehensive implementation of intermodal transport on international routes,” Anatol Kupryciuk, the President of the Board of Lotos Kolej said.

The modern Vectron MS locomotive for Lotos Kolej has a power output of 6.4 MW, is equipped with an ETCS system compliant with current specifications (Baseline 3) and has a maximum speed of 160 km/h.

The company signed the contract for the purchase of the Vectron in November 2020 as part of the project ‘Purchase of modern rolling stock by Lotos Kolej’, co-financed by the European Union through the Centre for EU Transport Projects (CUPT), for the implementation of intermodal transport. 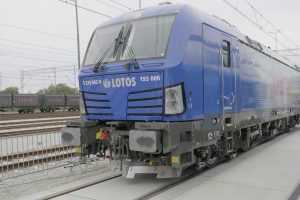 “The locomotive was purchased with a view to support intermodal transport, which in Poland is experiencing a real boom and is growing by more than ten percent year on year. This shows that LOTOS Kolej has a very good position in the market, investing in modern rolling stock, which can travel all over Europe without stopping,” said Krzysztof Celiński, the President of Siemens Mobility Sp. z o.

The locomotive has been approved for Poland, Germany, Austria, the Czech Republic, Slovakia and Hungary, while vehicles from the Vectron platform have been approved for operation in as many as 20 European countries.

Currently, nearly 60 Vectron locomotives are in the hands of Polish carriers, and many more arrive daily on the PKP PLK network from abroad. By now, more than 1100 Vectron locomotives have been sold to nearly 60 customers throughout Europe. The delivered vehicles have already travelled over 460 million kilometres.