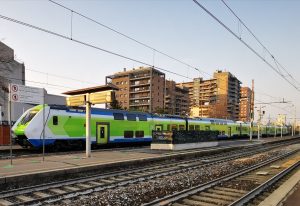 Lombardy region has approved the procurement of an additional fleet of 46 EMUs with a total value of EUR 351 million, the Region’s Councilor for infrastructure, transport and sustainable mobility, Claudia Maria Terzi announced.

The order comprises 26 Caravaggio high-capacity EMUs manufactured by Hitachi Rail Italy and 20 medium-capacity EMUs built by Alstom. The new electric trains are expected to be delivered in 2025 and to enter passenger operation in 2026 when Winter Olympics will be hosted by Milan and Cortina d’Ampezzo, a ski resort in northern Italy.

“The 46 EMUs will be delivered in 2025. The goal is to make rail transport more efficient on the routes that will provide transport services to the tourists who will visit Lombardy on the occasion of the Olympic event. Therefore, those rail routes that connect Milan to Valtellina and to the two main Lombard airports, namely Malpensa and Orio al Serio will be operated by the new trains. They will also serve the rail connection from Bergamo to Orio airport,” Claudia Maria Terzi said.

Under the plans, 20 new trains will enter passenger services between Milano, Sondrio and Tirano, 16 units on the Milano – Bergamo Orio Airport while 16 EMUs will operate on the route between Milan and Malpensa Airport. 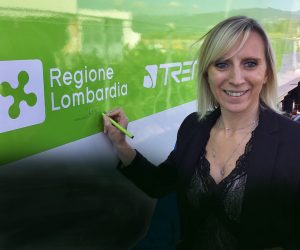 The investment will be covered by the Lombardy Plan and are part of the investments made by the Region in view of the Olympics. The Lombardy Region’s strategy includes the renewal of the train fleet with a total value of EUR 2.2 billion for 222 trains of which 21 trains which include 10 Donizettis and 11 Caravaggios are already in operation on region’s rail network.

The new Caravaggio and Donizetti trains are already operating various rail routes in Lombardy, resulting in an improvement of the quality of transport services. The new trains provide increased comfort for passengers and decrease the age of the Lombardy’s existing train fleet.

In November, Ferrovie Nord Milano awarded Alstom a EUR 160 million contract to supply 6 hydrogen fuel cell trains with an option for 8 additional trains which will be deployed on Lombardy’s rail network. With Alstom, Ferrovienord signed a contract to deliver 61 Donizetti regional trains Lombardy Region, with an initial oder for 31 trains expected to be delivered from 2022.

An agreement between Hitachi Rail Italy and Ferrovie Nord Milano was also signed for the delivery of 50 to 120 double deck high-capacity trains under the Lombardy Region’s plan to increase the capacity and quality of rail services.