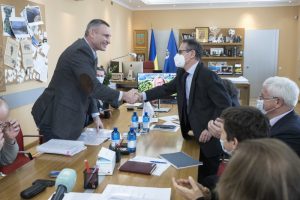 The European Bank for Reconstruction and Development (EBRD) and the Kyiv Metro company have signed an agreement for a EUR 50 million loan for the acquisition of new metro cars. A guarantee agreement between the Kyiv City Council and the EBRD was also signed.

­­­­­“We are delighted that our cooperation with such a reliable partner as the EBRD continues. Today we are entering a new stage of this cooperation. We are implementing a project to upgrade the rolling stock of the Kyiv metro,” Vitali Klitschko, the mayor of Kyiv, said.

The financing will help the procurement of 10 five-car metro trains (50 metro cars). The Kyiv Metro rolling stock fleet comprises 800 cars, of which 100 are in critical condition and need to be updated in the next three – four years. This loan will be used to upgrade half of the obsolete rolling stock.

The new metro trains will enter passenger services on the metro extension towards Vynohradar. The extension of the Line 3 will have a length of 3.7 km which will be served by two new stations – Mostytska and Prospekt Pravdy. To date, more than 700 metres of the 1.3 km tunnel towards Syretska (station on the Line 3) was completed while another tunnel between the future Mostytska and Prospekt Pravdy stations is currently being constructed.

EUR 206.7 million is the total value for the construction of the metro extension which is expected to carry 34,000 passengers per hour.

The new metro line promotes clean mass rail transit as the backbone of public transport. It will encourage more people to switch from private cars or polluting minibuses to more environmentally friendly means of transport and thus improve air quality and the city’s transport system.

In 2019, the EBRD has announced it will provide the Ukrainian capital EUR 50 million loan for metro train procurement. Starting 2019 the capital began implementing a number of important projects under the Green Cities programme. The projects concern the development of transport infrastructure and modernisation of the city’s district heating system. EUR 320 million is the total amount of projects of which EUR 180 million will be used for the modernisation and development of the public transport system.

The city plans the construction of the fourth metro line which will have 20 km and 13 stations, linking Kyiv residential district of Troyeschyna with the central business district.