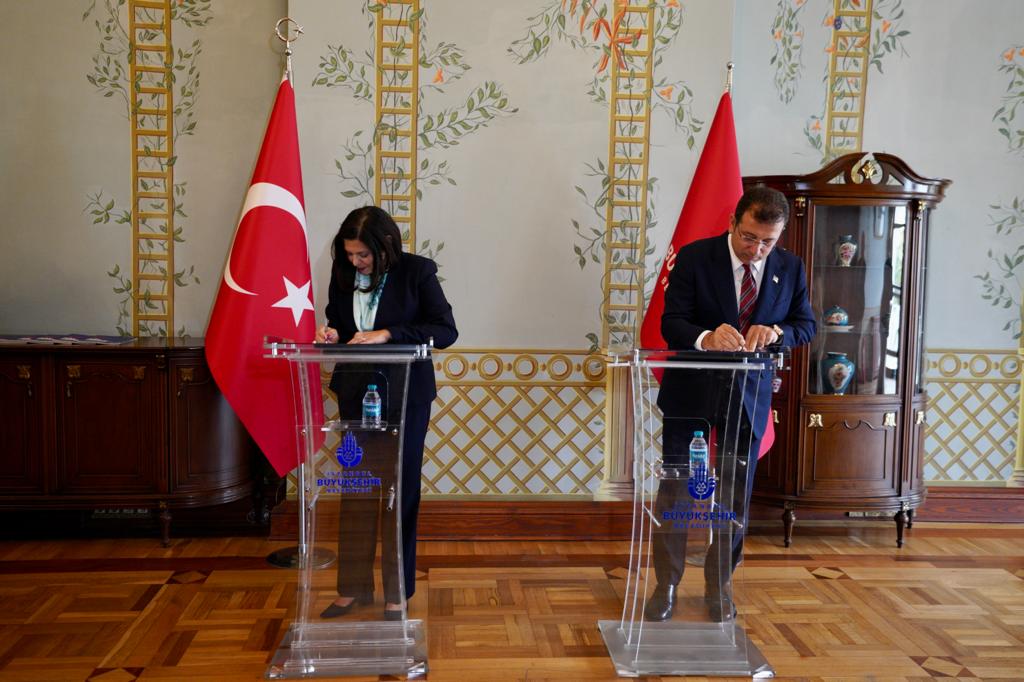 The Mayor of Istanbul, Ekrem Imamoglu, and the Managing Director of the Sustainable Infrastructure Group at the EBRD, Nandita Parshad, signed a contract for a EUR 75 million loan to support the construction of Goztepe – Atasehir – Umraniye metro line (M12).

“Rail networks play a great part in the vision we have for Istanbul. We are investing heavily in metro lines that are environmentally friendly, comfortable and fast. That is why Istanbul is in the position of being the city building the most metros simultaneously,” the mayor said.

This new fund is an extension of a EUR 97.5 million provided to Istanbul in 2019 which allowed the acceleration of construction works. Previously, the Municipality has received EUR 175 million loans and funds including from the EBRD and Black Sea Trade and Development Bank (BSTDB).

Currently, the progress in our line is at the level of 55 percent. Now, with the 75 million credits we have received at once, we will work hard to put this line into the service of our people as soon as possible. We plan to open the Ümraniye – Ataşehir – Göztepe metro line in 2024,” he said.

The 13 km fully automated metro line is served by 11 underground stations and is currently being built reaching a construction progress of 55%.

In February 2022, Alstom won the contract to design, deliver, install and commission the communications-based train control (CBTC) system including the electromechanical equipment for the new line.

In 2024, when the new automated metro line will be put into operation, it is expected to carry more than 44,000 passengers per hour per direction with an estimated daily ridership of 400,000 passengers.

The construction of Goztepe – Atasehir – Umraniye metro line was halted in 2017 and since September 2019 Gülermak started intensive work. The will connects the north with the south districts of the city and will provide links to the existing public transport system. It will also provide connections to the existing M5 line between Üsküdar and Çekmeköy at Çarşı station, with the M4 Kadıköy – Tavşantepe line at Yenisahra and with the Marmaray line at Göztepe station.

The project is part of the EBRD Green Cities initiative which supports city investments in green and sustainable solutions that advance their decarbonisation. Istanbul joined the programme in 2021 which joined the cities of Izmir, Gaziantep and Ankara.