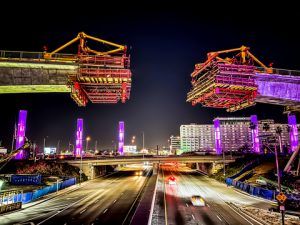 The guideway is the latest construction milestone for infrastructure project, which is expected to be completed in 2023.

“The completion of the guideway structure is a remarkable milestone for the project as we are one step closer to realising a new transport experience at one of the world’s busiest airports. We will soon leverage this accomplishment with train car testing later this year,” Sam Choy, project director at LINXS Constructors said.

In March, Los Angeles World Airports (LAWA) has replaced the fourth pedestrian bridge structure in the Central Terminal Area (CTA) over World Way which will connect the Automated People Mover (APM) Center CTA station to the extension of Terminal 1 once the train system is complete.

“The Automated People Mover project is a critical investment for Los Angeles’ infrastructure as the city prepares to host the 2028 Olympic and Paralympic Games. This is a logistically challenging project that requires close coordination with numerous public and private entities,” Thomas Nilsson, president of Fluor’s Infrastructure business said.

The guideway construction began in November 2019 with the first underground support columns being placed, followed by the first concrete column pours in January 2020 and the first guideway segment pour in September 2020. A total of 69,700 cubic yards (18,819 tonnes) of concrete were poured since 2019 to complete the structure, along with more than one million work hours.