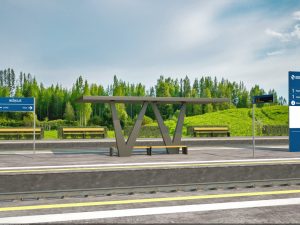 Latvian Railways, LDz, has announced a tender for the design and construction of 48 stations and stops considering a common passenger visual guidelines system.

Considering the project’s size, the procurement has been divided into six lots. They include the construction of the elevated platforms on the Riga – Jelgava line, Riga – Tukums II, Riga – Krustpils, on the Zemitāni – Skulte line with Zemitāni – Vecāķi and Kalngale – Skulte sections, and the introduction of a unified passenger information and video surveillance systems.

The companies can submit their proposals for each part of the separately tender, but at the same time, a company is allowed to submit a proposal for one or several parts of the procurement process.

Under the project, the passenger infrastructure will be fully upgraded on the electrified lines such as Riga-Tukums II, Riga-Skulte, Riga-Krustpils and Riga-Jelgava. The new stops will be constructed near Silikātu Street and Slokas Street (on the Torņakalns – Bolderāja line), Dauderi (on the Zemitāni – Skulte line) and close to Alfa shopping mall in Riga, on the Riga – Cēsis railway line.

“Railways, as a way of transport, is becoming more popular in Latvia therefore it is important to create accessible, convenient and safe infrastructure for every passenger that would encourage modal shift from the other transport means to railways. I am confident that upgrade and construction of the 48 stations and stops will be an important step towards railway as the backbone of traffic in Latvia,” Māris Kleinbergs LDz board chairman said.

During the project, LDz has closely collaborated with the Ministry of Transport, Pasažieru vilciens, the rail passenger operator and the Road Transport Directorate. The social partners, experts from urban environment and transport sector were also involved to establish the way infrastructure can be adapted and fully available to passengers, providing increased access for all passengers including people with reduced mobility.

Under the project, each station and stop will have elevated platforms, modern and functional canopies, benches and bicycle parking spaces, tactile markings and guidance systems, passenger information and video surveillance systems, a unified standard of information signs, as well as access to platforms for people with disabilities. At the same time, the project also includes the relocation of certain stopping points to provide more convenient location for the residents and will also involve the reconstruction of the rail tracks.