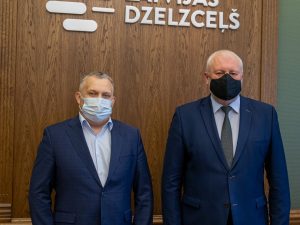 The LDz Chairman Māris Kleinbergs and the first deputy director of October Railway Sergey Dorofeyevsky met in Riga on May 21 to discuss further cooperation.

“October Railway is one of LDz’s most important cooperation partners for many years. I am satisfied that during these quite challenging times, when cargo transport volumes by rail tend to decrease, we can meet to discuss development of mutual cooperation and the next steps that should be made in order to increase competitiveness of rail transport compared to other modes of transport,” LDz board chairman said. 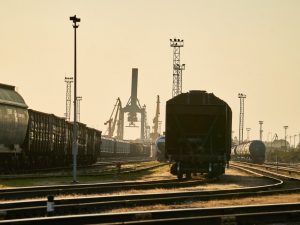 Along with operational cooperation issues, the heads of both railway companies and experts discussed development of the route Kaliningrad-St.Petersburg via Kaunas and Riga that would help to develop international passenger transport. As Lithuania is also involved in this matter, it is important to achieve an agreement with all involved railway companies.

The parties agreed that they will continue the started work to develop the route Kaliningrad-St.Petersburg via the territory of the Republic of Latvia.

Latvian transport and transit sector experienced significant challenges during the last two years and Latvian Railways is facing the decrease in the volume of cargo transport negatively affected by the situation caused by the coronavirus Covid-19 pandemic.

Despite the decrease of freight transport, in 2020 LDz invested EUR 11.2 million to modernise and develop the rail infrastructure and started the works for an ambitious passenger modernisation programme covering the modernisation and construction of new modern and passenger-convenient platforms at 48 railway stations and stops throughout Latvia.