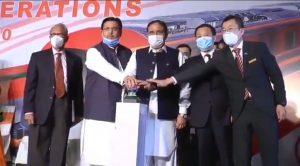 “This project will offer world-class facilities to the people of Lahore,” Usman Buzdar said at the opening ceremony.

The Orange Line has a length of 27.1 km of which 25.4 km is elevated line and 1.7 km is underground. The line connects some city’s important nodes including the Shalimar Gardens complex, the University of Engineering and Technology, as well as Lahore Central train station and Ali Town area, where is located the stabling Yard which includes washing facility, minor repair facility, parking facility. 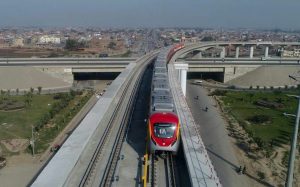 The line which is served by 26 stations of which Anarkali and Central stations are underground constructed while the remaining 24 stations are elevated. The line has a train depot at Dera Gujran on the northeast part of the line, where the central control centre, workshops, training center and parking facility were constructed.

Lahore first metro line is operated by 27 five-car trains capable to run at speeds of 80 km/h. Each train has 200 seats and standing passengers at an average density of 5 persons per square metre with 20% of passengers seated and 80% standing. In 2017, CRRC Zhuzhou Locomotive has unveiled the first metro trainset for the city’s metro system.

In December, the city has started the line’s tests.

It is expected that the line will transport 250,000 passengers each day and by 2023 the ridership will increase to 300,000 passengers per day, according to authorities’ estimations.

The line reduces the travel time to 45 minutes compared to two-and-a-half-hour by bus.

USD 1.8 billion was the total value of the project implemented by a joint venture comprising  China Railway Corporation and China North Industries Corporation. Being part of China-Pakistan Economic Corridor (CPEC), the line was jointly funded by the Pakistan Government and China’s Government. The Chinese side provided a USD 1.5 billion according to a Memorandum of Understanding signed with the Export-Import Bank of China in 2014.

The project is “a culmination of Pakistan-China friendship that began with the China – Pakistan Economic Corridor (CPEC). It is the first transport project under CPEC and a gift to the people of Lahore,” the Chief Minister of Punjab said.