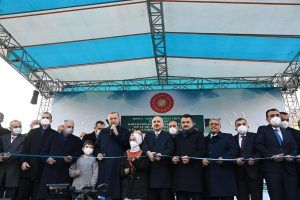 Turkey’s President Recep Tayyip Erdoğan and the Minister of Transport and Infrastructure Adil Karaismailoğlu have inaugurated the 102 km Konya-Karaman high-speed line linking the two cities within 40 minutes, from 2 hour and 20 minutes.
The new line is served by four stations and was designed for trains running at over 200 km/h. From Istanbul to Karaman the train will travel is 5 hours and 40 minutes and on the Ankara-Konya-Karaman line, the travel time decreased from 3 hours and 10 minutes to 2 hours.

The official ceremony was held at Konya station on January 8, 2022. “We are starting a new era by opening the Konya-Karaman high-speed line. (…) For those living in Konya, travelling to Ankara, Istanbul and Eskişehir by train is now more comfortable, easier and more economical than other means of transport,” the President said.
The new railway line will bring annual savings of TRY 63 million (USD 4.56 million) from energy, accident prevention, emission savings as well as maintenance costs.

Following the completion of the project, the capacity increased from 26 to 60 pairs of trains, “strengthening the capacity of the rail network,” the Minister of Transport said.
TRY 1.4 billion (USD 101.3 million) was the value of the project which covered the modernisation of the infrastructure and superstructure and the construction of 74 bridges and culverts, 39 under-overpasses and 17 pedestrian underpasses and overpasses.

The line to Adana and will be part of the south axis rail development strategy. The new high-speed line will be extended from Karaman to Adana through Ulukışla, which achieved an 89% physical progress of the infrastructure and superstructure. From here, the line will reach to Mersin, and then the Osmaniye and Gaziantep routes will be created. The entire line will be 135 km-long which will require “the construction of 2 tunnels, 12 bridges 44 under-overpasses and 141 culverts. We continue the design studies for signalling and telecommunication systems and soon will launch the tender for electrification works,” the Transport Minister said.

Turkey is focused on the development of the rail network and soon a new high-speed will is expected to enter commercial operation. “When the Ankara-Sivas will be opened, we will deliver high-speed train connections to all four parts of our country. Currently, the Ankara-Sivas high-speed rail is on trials and the Halkalı-Kapıkule railway line is under construction,” Erdoğan said.
Turkey has increased its rail network from 10,959 km lines which were modernised to 13,222 km by constructing 1,213 km of high-speed lines and 219 km of conventional lines