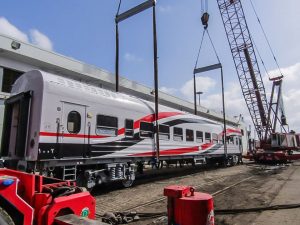 This is “Knorr-Bremse’s largest ever individual equipment order in Egypt. It is our first joint original equipment project in Egypt with our partner TMH International. Along with our global production network, one of the key reasons we were awarded the contract is our established successful presence in Egypt’s growing rail transportation market,” said Jürgen Wilder, Member of the Executive Board of Knorr-Bremse AG and responsible for the Rail Vehicle Systems division.

“Our braking systems are key to the long-term modernisation of rail transport in Egypt and to delivering enhanced mobility for the people who live there. As the technology helps to connect some of the country’s major cities, it can also contribute to tackling road congestion,” said adds Mark Cleobury, Member of the Management Board of Knorr-Bremse Rail Vehicle Systems.

The first cars are scheduled to enter regular passenger service in the third quarter of 2020.