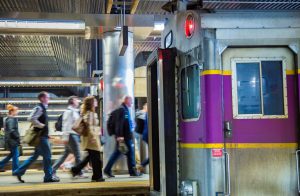 The 4-year extension contract includes incentives for improved commuter rail service immediately through performance payments for on-time performance, train crew staffing, and seating capacity, which are designed to achieve service outcomes and promote continuous improvement. These incentives related to performance are worth a potential total of USD 5 million per year in fiscal years 2021-2026.

Another benefit of the contract is related to the measures to address fare evasion or non-collection through the continuation of the revenue share agreement for fiscal years 2023-2026, including the installation of automated fare gates that will significantly reduce ticketless travel. Train crew staffing incentives will also result in additional conductors onboard trains to check tickets.

Under the extended contract, the fleet availability and reliability will be increased through improved management of mechanical parts and will allow an increased flexibility and time to develop the transformational successor contract, with the possibility of re-procurement as early as 2025.

During the extended contract, MBTA will continue its plans for the future of Boston commuter rail with a new contract developed upon the completion of contract study and the development of additional contract objectives.

The rail transformation plan will continue to be developed based on objectives for future commuter rail service with critical investments beginning to be made in infrastructure and rolling stock to better position the MBTA for a more competitive procurement.

The rail contract with Keolis includes mechanical, transport and engineering services. The operated network has a length of 640 km of tracks comprising 14 lines, served by 139 stations. In 2019, 36 million passengers were transported on Boston commuter rail network.