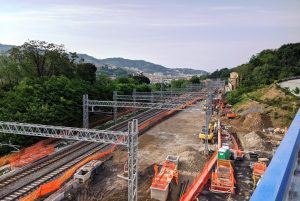 Luigi Ferraris, the Chief Executive Officer of Ferrovie dello Stato Italiane has announced that during 2022, the company will launch several rail infrastructure tenders worth EUR 19 billion which will be supported by the National Recovery and Resilience Plan (PNRR).

“The FS Group plays a fundamental role in the PNRR, and Rete Ferroviaria Italiana is our largest contracting company. The goal of the tenders’ launching between the second half of 2022 and the first months of next year is to comply with the deadline of the Recovery and Resilience Plan,” the CEO said.

In April, Rete Ferroviaria Italiana has already accounted for over 12% representing EUR 3 billion of the allocated funds through the PNRR.

The rail infrastructure tenders will cover the construction sites on the Naples – Bari project for which all the lots have been included in the PNRR, the Palermo – Catania line for which two tenders will be launched, in Liguria on the Genoa rail node and Terzo Valico where the excavation of the tunnels reached 94 and 79% respectively. The works include Brescia to Padua connection on the Turin – Venice route where currently the work is carried out on the Brescia – Verona and Verona – Bivio Vicenza sections.

The objective is to accelerate the projects towards an increasingly efficient, sustainable, safe and resilient mobility, to also favor the most effective interconnection of transport systems, Luigi Ferraris explained.

The ERTMS deployment is part of company’s strategy to digitalise its rail infrastructure which has also received funding from the Recovery and Resilience Facility. Recently, the rail infrastructure manager RFI awarded EUR 2.7 billion contracts for ETCS level 2 installation on 4,220 km of rail lines split into four lots. 1,377 km lines are to be equipped by 2024 and further 2,023 km until 2026. By 2036, Italy intends to equip 16,800 km of railway lines with the new European Train Control System.