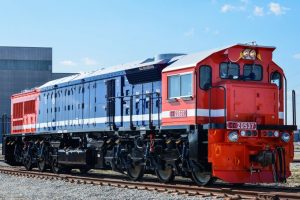 PT KAI will have 36 new freight locomotives from Progress Rail as the two companies signed a contract which will allow the expansion of operator’s GT series fleet.

It is expected that the EMD GT38AC locomotives will be delivered in late 2021 and they will be used for coal transport in South Sumatra.

“We welcome the opportunity to once again work with PT KAI, delivering another wave of our GT Series locomotives, which have demonstrated strong performance, reliability and efficiency in global service. We look forward to continuing to support PT KAI with our broad solutions to help them achieve their operational goals,” Marty Haycraft, the CEO of Progress Rail said.

The new locomotive model was designed specifically for Southeastern Asia and Sub-Saharan Africa environments. The six-axle locomotive features an 8-cylinder EMD 710 engine and AC traction, along with a cab and car body designed for improved visibility.

The AC traction allow vehicles to generate an output of 2,200 HP and starting tractive effort of as much as 450 kN. The locomotives integrate EMD 710-Series engines together with AC traction technology to provide superior efficiency and performance for a broad range of operations.

The locomotives have a high capacity dynamic brake which offers uniform braking effort over a wide speed range and inverter driven accessories for improved fuel economy.

In Indonesia, the locomotives are known as Class CC205 which, in daily coal operations are coupled together using multiple unit for easier haul. Two Class CC205 locomotives can replace three units of the old-CC202 vehicles with 60 coal hoppers with a total payload of 3 thousand tonnes.

For the first time in the country, the CC205 locomotives are equipped with an automatic engine start/stop system allowing an increased efficiency.

The locomotive can operate at a maximum speed of 80 km/h, but it operates at 60 km/h due to the high freight volume.