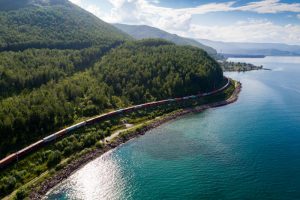 The container transport between China and Europe on Russian Railways infrastructure increased 1.6 times compared with the same period last year, reaching 502,600 TEU, in the first 11 months of 2020.  The transport of loaded containers increased 1.8 times to 485,600 TEU. In terms of volume, 3.6 million tonnes was transported through Russian railway network, an increase of 1.9 times.

At the same time, the transit from China to Europe has grown since the beginning of the year by 1.8 times, reaching 346,800 TEU, and by a third from Europe to China reaching up to 155,700 TEU. Consumer goods, cars, hardware, machine tools and engines, chemicals, and nonferrous metals make up most of the shipments.

In general, the volume of container transport through the railway network of Russian Railways from January to November 2020 amounted to about 680,000 TEU, which is 1.5 times more than in the same period last year.

The growth of transit volumes is facilitated by the competitive pricing conditions that have been set, the expansion of the range of shipments, and the improvement in the quality of services, as well as the diversification of transit routes.

According to UTLC ERA, which provides container transport services on the route China-Europe-China through Kazakhstan, Russia and Belarus, more than 500 thousand TEUs have been transported on the three rail networks since the beginning of 2020. “Half of the goal to deliver one million containers per year on this route has been achieved. So that our plans and expectations are very much focused on this target and we will continue with our partners to get there sooner than 2025,” Alexey Grom, CEO of UTLC ERA said.

The company says that for the first time ever in the history of rail freight traffic this record has been achieved on 1520 mm China-EU track gauge. The current total transit volumes are one and a half times higher than for 2019, reaching 333 thousand TEUs. The key factors that contributed to volume growth are predictability and stability of supplies that rail insures during the pandemic. Rise in the cost of air and sea freight due to COVID-19 restrictions had its impact as well.  Driven by railway advantages major goods and auto manufacturers have made a decision to expand rail freight traffic between Europe and China during the coronavirus crisis. They highlighted that time and several tests proved that rail is way more reliable than expected, especially in winter season.