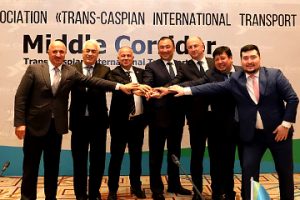 The volume of cargo along the Trans-Caspian International Transport Route (TITR) is projected to grow six times, at the level of 3.2 million tonnes, the participants at the general meeting of the association announced in Ankara.

The growth is due to the sharply increased demand for the TITR route against the backdrop of recent events taking place in the world. The container shipping plan also aims to increase to 50,000 twenty-foot equivalent containers (TEU).

In 2021, the transit and container traffic on the route reached 25.2 thousand twenty-foot equivalent containers (TEU), which is 20% more than in 2020.

In April Gaidar Abdikerimov, the Secretary General of the TITR Association, said that there are opportunities and long-term plans for the development and extension of the Trans-Caspian International Transport Route, including the growth potential through the Georgian ports of Poti and Batumi. During the meeting held in Poti, Georgia, negotiations were held between representatives of the TITR Association with the companies APM Terminals Poti, Pace Georgia Ltd., Maritime Port Administration Constanta, DP World Constanta, Grampet, Port Gdansk, as well as Georgian, Turkish, Azerbaijani and other foreign transport and logistics and shipping companies. All sides agreed to organise and develop the transport and logistics services along the TITR route crossing the ports of Georgia with export and transit cargo from Kazakhstan, China and Central Asian countries.

The TITR route starts from Southeast Asia and China, running through Kazakhstan, the Caspian sea, Azerbaijan, Georgia and further to European countries.