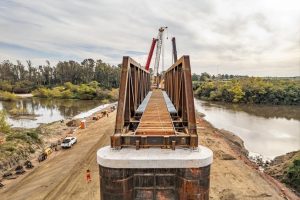 IDB Invest has provided new financing package for Uruguay Central Railway Line to improve the connectivity and integration across the country with its capital, Montevideo. The financing consists of a USD 250 million senior facility through a fixed rate B-bond, the largest B-bond structured by IDB Invest to date.

The project aims to improve the connectivity and integration of the interior regions of Uruguay, with its capital, Montevideo, building and maintaining 273 km of rail lines. The total financing of the project was carried out in dollars and in local currency.

The funding will be unlocking the financing available from international institutional investors, while supporting Uruguay’s goal of attracting direct foreign investment and channeling new resources to support infrastructure projects.

“Investing in large-scale, sustainable infrastructure projects can have a transformative impact for the future of our region. At IDB Invest, we continue to innovate to mobilise financing and attract new investors to Latin America and the Caribbean,” Gema Sacristan, IDB Invest’s Chief Investment Officer said.

This new facility follows a previous financial package provided by IDB Invest in 2019 for approximately USD 536 million, consisting of a USD 300 million loan from IDB Invest and the remainder mobilised from two international commercial banks for up to USD 161 million. The total financing of the project is completed with funds from CAF-Development Bank of Latin America and the Caribbean, which participates with USD 85 million, and from CAF-AM Asset Administrator of Uruguay, which incorporates the equivalent, in local currency, of approximately USD 312 million.

The project was executed through a public-private participation (PPP) contract between the Ministry of Transport and Public Works of Uruguay and Grupo Vía Central a special purpose company created with this purpose.

Uruguay Central Railway Line project consists of the modernisation and construction of a 273 rail connection between Montevideo and the city of Paso de los Toros. Under the project, 26 km of line from Montevideo will be constructed as double track followed by a single track line with other 12 secondary branches for train crossings. 40 rail bridges include upgrade or reconstruction works and up to 25 passenger stations will be improved. The project also involves the improvement of the signalling systems and the 246 level crossings along the line.

The project was initially expected to become operational in  September 2022, but the government has extended its completion by 8 months due to land acquisition. The operations are now scheduled for May 2023.