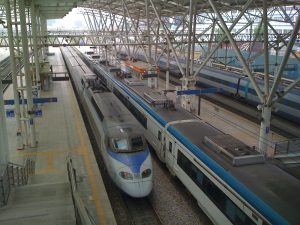 Korea Rail Network Authority has ordered additional five 8-car trains from Hyundai Rotem which will operate on Seoul GTX Line A commuter route which is under construction. The contract has a value of Won 119.2 million (EUR 87.7 million).

This is Hyundai Rotem second order for Seoul train fleet. In March the manufacturer won a contract for the supply of 15 eight-car trains for the GTX Line A. Under the first contract, with a value of Won 345 billion (EUR 253.86 million), the trains will be delivered by 2024.

The new trains, which will run at speeds of 180 km/h, will have a capacity of 1,090 passengers. The trains will have a metro-style design but will offer a great noise reduction similar to the high-speed trains.

Seoul GTX Line A will be an 83.1 km line served by 10 stations which will link Unjeong in Paju, north of the capital, crossing the Seoul centre to Dongtan in Hwaseong, in the south. The line is expected to enter commercial services in 2023. The line will reduce the travel time by 80%, offering a 40-minute journey between Paju and Dongtan. The Line A daily ridership is estimated at 300,000 passengers.

The project is implemented by SG Rail, a special purpose company responsible for the design, construction and financing of the GTX Line A. In January the company awarded Ricardo a system engineering contract for this line.

This is the first high-speed commuter rail lines in the Seoul metropolitan area. The lines B and C were approved in 2019 and are expected to be operational in 2027, when they will add 130 km to Seoul commuter rail network. Hyundai Rotem expects to be also awarded the train contracts for these two new GTX lines.