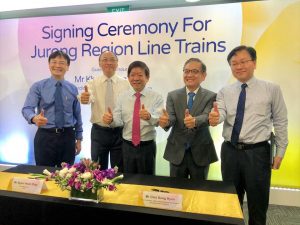 The first train is expected to be delivered in 2024.

The new 1.5m-wide trains will be manufactured in South Korea, while for sub-systems (such as train doors) Hyundai Rotem will engage various existing suppliers of other trains in Singapore. This allows for greater commonality of spares and enables more efficient and responsive maintenance support. 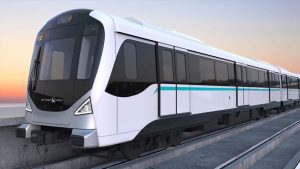 They will be equipped with advanced condition monitoring and diagnostic systems to detect train faults and some of the new trains will be fitted with an automated track inspection system to monitor the real-time condition of the running rail for defects. This will enable the future JRL operator to adopt a more preventive and predictive maintenance regime, which is more efficient.

Each train will have three wide doors on each side and will feature space for wheelchair users and strollers.

For trains’ maintenance, LTA is constructing the integrated rail and bus Tengah depot. The USD 542.7 million contract was awarded in November to China Railway 11 Bureau Group Corporation. The depot will be commissioned in 2026. 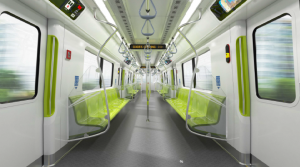 Jurong Region Line is Singapore’s seventh MRT line, serving western part of Singapore. The 24-km elevated line will have 24 stations, including three interchange stations. In September, LTA awarded Shanghai Tunnel Engineering two civil contracts for the construction of five stations including their viaducts and in December another contract was awarded to China Railway 11 Bureau Group for two other stations.

The line will be fully operational in 2028, when the western extensions will be completes. The first 10 stations will enter services in 2026, followed by the opening of further seven stations in 2027.