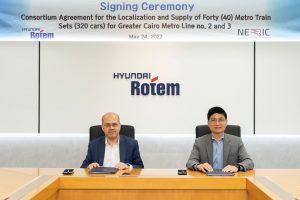 The National Egyptian Railway Industries Co (NERIC) and Hyundai Rotem signed an agreement for the supply of 40 8-car trains (320 cars) for Cairo metro lines 1 and 2 and for train manufacturing localisation.

NERIC is a private joint-venture formed by a group of Egyptian companies in partnership with Governmental entities.

NERIC is currently constructing the rolling stock facility in a prospective area of 300,000 m2 located in East Port Said Industrial which is part of the Suez Canal Economic Zone. The plant is expected to begin operations by the second half of 2023.

The rail company says that the construction of the plant is a “a significant step towards the train manufacturing localisation” and will bring benefits to the rail industry in Egypt.

In the first phase of its operation, the plant will manufacture 100 units per year, increasing its capacity at 125 units per year in the second stage, with the ultimatum goal to produce 150 vehicles per year.

According to the company, the overall projected demand of the local Egyptian market for both the rehabilitation and manufacturing facilities will be over 3000 coaches over the upcoming 10 years.

The contract is part of a Memorandum of Understanding signed between Hyundai Rotem and the Ministry of Planning and Economic Development and the Ministry of Transport aiming at rolling stock localisation in Egypt. The manufacturing process will significantly involve Egyptian companies. Last year, the authorities announced that by 2023 the rail industry localisation should reach 25%, increasing at a 50% share by 2027 and in 2033 the share is expected to grow at over 75%. These objectives will help Egypt to boost rail industry development and economy and is considered a powerful engine for the transfer of new technologies and to create more jobs across the country.

In May, Hyundai Rotem has sent the 23rd metro train as part of a contract signed in 2017 to deliver 256 railcars for the Line 3 that has been opened in 2020. For the manufacturing of these 32 eight-car metro trains, the localisation is expected to reach 25%.

In addition, Hyundai Rotem was awarded in 2019 another contract covering the delivery of 48 trains for Cairo metro Line 1, which also includes the provision of maintenance services until 2031. The train delivery was fulfilled in 2021.

Cairo Metro is implementing several projects to develop and modernise the entire system through the construction of new lines and rolling stock procurement. In 2021, the Egyptian National Authority for Tunnels (NAT) signed a USD 350 million contract for 184 metro cars which will operate on the Line 4 currently under construction. The 19-km line with 16 stations will provide transport services linking the new Grand Egyptian Museum and the Gizah pyramids.

At the end of 2021 NAT has also awarded a EUR 876 million contract for 55 9-car Metropolis trains which will operate on the upgraded Cairo Metro Line 1. Meanwhile, CAF will refurbish the existing 23 trains running on the Line 1.