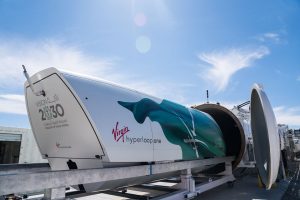 Saudi Arabia’s Ministry of Transport commissioned Virgin Hyperloop One to conduct a pre-feasibility study on the use of hyperloop technology for freight and passenger transport.

The study will examine viable routes, the demand for such services, estimated costs and will explore the socio-economic benefits of creating jobs and develop high-tech skills.

As we enter a new decade, we intend to make rapid progress in building the infrastructure required to define mobility for the future, enabling the efficient movement of people and goods. With the transformative hyperloop technology, Saudi Arabia will not only unlock unparalleled benefits for its people and the economy but will continue to lead the region into an era of prosperity,” said Saleh bin Nasser Al-Jasser, the Minister of Transport.

“In line with Vision 2030, I am confident we will see the world’s first commercial hyperloop within the decade. The Kingdom is on the forefront of this new era in transport by being the first in the world to explore a national hyperloop route. The economic potential is enormous to connect passengers and cargo at unprecedented speeds with zero direct emissions,” Jay Walder, CEO of Virgin Hyperloop One, said.

Having already attracted major investors from the UAE, including, DP World, as well as others such as Abu Dhabi Capital Group, a hyperloop system would see passengers travel at speeds exceeding 1,000km/h, cutting the travel time from the capital to Jeddah to 46 minutes. Similarly, a journey from Riyadh to Qiddiyah would take only 5 minutes. While a trip from Jeddah to Neom could be completed in 40 minutes and from Riyadh to Abu Dhabi in only 48 minutes.

The study is the first at a national level to be carried out anywhere in the world and will transform the Saudi Arabia’s transport system outlined by the 2030 Vision.