While a decade ago hydrogen was not even mentioned as a viable source for transport, today we are witnessing a rapid rise of this technology, with more and more sectors and industries embracing this trend. Through the commitments made, a page is written daily in the history of a new economy, driven by new concepts and methods, which, over the next decade will be significantly transformed so that from 2030 the whole society will function differently from what is happening today and so that from 2050 we can talk of a completely different economy, a climate neutral one.

Clean hydrogen (“renewable hydrogen” or “green hydrogen”) can be a vector in limiting emissions and raising the global average temperature to less than 2°C compared to pre-industrial levels (the well below 2°C scenario), as ratified by 191 of the 197 Parties to the Paris Agreement. It entered into force in November 2016, 30 days after the date on which at least 55 Parties to the Convention accounting in total for at least 55% of the total global greenhouse gas emissions have deposited their instruments of ratification, acceptance, approval, or accession with the Depositary. The agreement aims to increase the efforts of states that will also work together to have an impact on climate change, on financial availability to support measures and on projects to reduce emissions and to achieve a high degree of resilience.

Hydrogen and energy have a long shared history since 200 years ago, when the first internal combustion engines were powered, but never had the political and financial support they have today. Hydrogen’s contribution to the transition to clean energy is dependent on how it is applied in the various economic sectors, which need to implement the new technology on a large scale, but at affordable prices.
According to the study The Future of Hydrogen, published by the International Energy Agency (IEA), demand for hydrogen has grown more than threefold since 1975 and continues to increase, almost entirely supplied from fossil fuels. Every year, hydrogen production consumes 6% of the world’s natural gas (namely 205 billion m3) and 2% of coal (107 million tonnes of coal).

Because of the method by which it is obtained, hydrogen production is responsible for emitting 830 million tonnes of CO2 per year, a value that is equivalent to the CO2 emissions of the United Kingdom and Indonesia combined, the agency states.
Hydrogen can be extracted from fossil fuels and biomass, or from water, or from a mix of both, and natural gas is the primary source of hydrogen production, accounting for three-thirds of the annual global production which reaches 70 million tonnes, namely 6 % of global natural gas use. Coal comes next due to its dominant role in China, and petroleum and electricity account for a small part of the dedicated production.
Although hydrogen is part of energy sources, in order to reach its potential for sustainable fuel, it must be produced based on the same consideration – sustainability. As a result, the industry is focusing on the production of clean hydrogen, for which interest is growing and which has a secure future. For the time being, about 0.1% of global hydrogen is produced by water electrolysis, and with declining costs for renewable power, in particular solar photovoltaic and wind energy, electrolytic hydrogen could be the basis of the world’s energy system.
Currently, electrolysis accounts for 2% of global hydrogen production and there is a significant probability for electrolysis to supply more and more hydrogen with a small amount of carbon.
In the last 20 years, more than 200 projects have been launched to turn electricity and water into clean hydrogen to reduce the level of emissions in the industrial and transport sectors, or to support the integration of renewable solutions into the energy system.
Although reducing emissions from existing hydrogen production is a challenge, the process itself becomes an opportunity for both the industry that produces it and the industry that uses it, and the next period will build up momentum for increasing the production of clean hydrogen.
Clean hydrogen plays a key role in the transition of all economies to a sustainable future and is seen as the most efficient decarbonisation solution, from renewable energy storage to energy supply in transport and as a raw material in the energy-consuming industry, such as steel or chemical sectors.
Due to its properties, hydrogen obtained by sustainable methods is environmentally friendly – it does not emit carbon dioxide from the time of use – having the contribution of decarbonising industrial processes, and, as a result, of reducing emissions.
The IEA study states that about 70 million tonnes of hydrogen are currently produced, of which 76% comes from natural gas and 23% from coal.

Opportunities in the rail market

The transport sector accounts for 27% of total greenhouse gas emissions in the European Union and there is a need to step up efforts to decarbonise this sector. Through the Sustainable and Smart Mobility Strategy, the European Commission has clearly shown its directions towards the creation of a sustainable transport system which, through various combinations of policy measures and projects, can achieve a 90% reduction in transport generated emissions by 2050. The strategy hits the nail on the head when it comes to the current sustainable modes of transport, rail and inland waterways which have to take over a large part of the freight traffic by road and decisive measures and projects will need to be implemented in order to shift mobility towards sustainable systems, in particular attracting an increasing number of passengers to the railway and, in urban areas, to public transport systems, especially rail.
Thus, rail transport can take over a large part of these flows, and through its development and the introduction of modern technologies, it can become the first choice for the mobility of passengers and freight, without any challenge of capacity or otherwise.
In addition to other projects that characterise the superiority of railways and vehicles, hydrogen, as an energy carrier in the railway sector, can replace diesel traction and gradually eliminate this fuel that causes emissions from railway activities.
In the transport sector, hydrogen is a great opportunity where electrification is not a practical option and is difficult due to several factors. In the initial phase, the strategy states that it will be necessary to adopt hydrogen early on, which could take place in sequential uses such as buses (in the urban transport system), or on different sections of railway, where electrification is not feasible. Hydrogen charging stations can also be easily supplied by local or regional electrolysers, but this network needs to be built on demand. Hydrogen fuel-cell trains could be developed and put into operation on various viable trade routes that cannot be electrified due to cost efficiency or difficulties. At European level, currently 46% of the main network is still operated by diesel trains, and hydrogen trains can be introduced, as they are already cost-competitive compared to diesel traction. This hypothesis is supported by the EU mobility strategy announced in December 2020. The conclusion? – the use of hydrogen must be increased where electrification cannot take place.
As a result of various analyses and research and innovation projects, hydrogen is becoming a clear case of accelerating the achievement of the zero-emission target in rail transport, significantly reducing emissions in the transport system, particularly when the railway takes over most of the traffic flows.
In addition to the ability to be environmentally friendly, either retrofitted with hydrogen-based diesel capability or replaced by new hydrogen trains, the vehicles are able to provide increased capacity, comfort and safety, adapted speeds and at the same time they can be easily fuelled and can successfully serve commercial services while also being flexible to accommodate train timetables.
A comprehensive study presented by Shift2Rail JU and FCH 2 JU in 2019 and conducted by Roland Berger (Study on the use of fuel cells and hydrogen in the railway environment), concludes that fuel cell and hydrogen technology can become a viable option to replace diesel traction, with the first products operating in passenger traffic, with the first train operating in Germany since 2018 – Coradia iLint. Hydrogen-based trains are competitive with electric trains and cost about EUR 0.5 per km compared to diesel trains, and in the case of shunters and hydrogen-based locomotives, the costs amount to EUR 1.5-1.6 per km.
The baseline scenario of the study estimates that the potential of hydrogen trains could reach 20% by 2030, with an estimate of one in five diesel trains likely to become operational on hydrogen.
The multiple units make up the largest segment with such trains for which there are estimated to be 200 standard units by 2024 and 308 by 2030. This segment is followed by shunters with a potential of 50 units by 2028 and 72 by 2030, and the mainline locomotive fleet of hydrogen-powered locomotives could be 28 vehicles in the period 2025-2028 and 36 in 2030. As a percentage, multiple units would have a market share of 30%, shunters, 12% and locomotives, 8% of the potential of the purchase volume in 2030, representing a total of 943 standard units in the period 2022 – 2030.
In the case of the high scenario, the study states that hydrogen-based trains could have a market share of 41%. 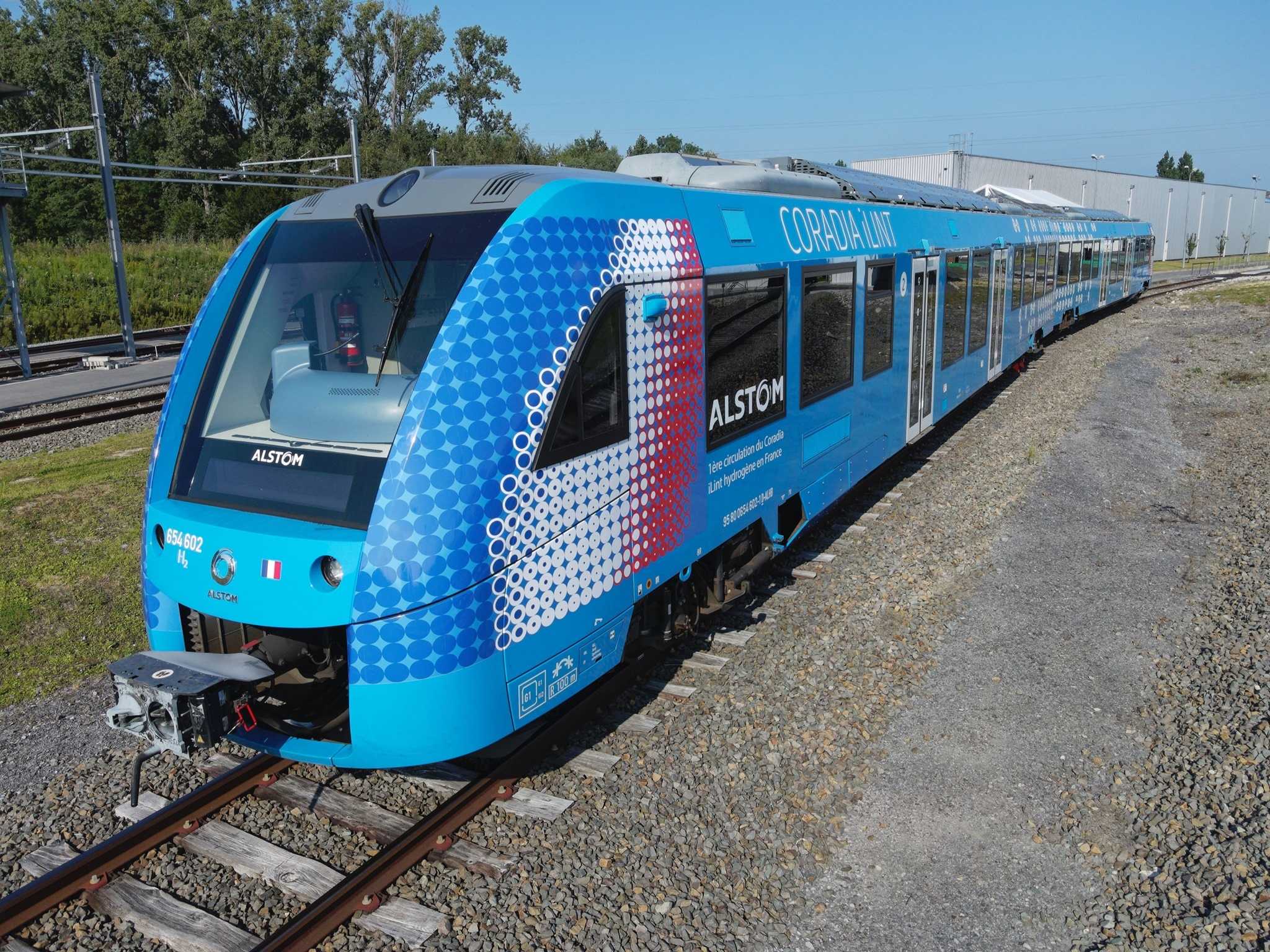 Since the release of the analysis, several states, not only European, and also companies, have responded to this challenge by signing agreements for the development of hydrogen-based trains and locomotives, but have also tested and ordered the first hydrogen-based trains.
For example, authorities in the Sakhalin Region, Russian Railways, Rosatom and Transmashholding have signed an agreement to look into the feasibility of introducing hydrogen trains, which also includes an assessment of costs and financial models for the implementation of the project. The parties estimate that 7 trains will be designed and built initially, along with a hydrogen production facility, a fuelling network and a test site.
Ukraine is also interested in harnessing the potential of hydrogen as it works on a national hydrogen strategy and is laying the foundations for a pilot project for hydrogen production; it aims at seeing its applications translated into transport, with a focus on engaging the railway sector.
The United Kingdom has developed the train (HydroFlex) which entered operational tests in 2020 and will be presented at COP26 in Glasgow in November. A report released this year by the House of Commons Transport Committee highlights the need to decarbonise transport and the need to develop a national strategy for setting up electrification projects, using battery and hydrogen technology in the railway. Since the British authorities want to revolutionise the railway system and phase out diesel trains, other projects are being rolled off as well. For example, Alstom and Eversholt Rail are developing the Breeze train for which EUR 1.17 billion has been allocated and it is estimated that they could become operational in 2024. The application of hydrogen to the railway is also being developed in Scotland, where a project started by Transport Scotland in collaboration with Angel Trains, the University of St Andrews and Arcola Energy will convert a locomotive to run on hydrogen.
In France, April 2021 entered the history of the railway transport revolution with an order for the first 12 dual mode electric-hydrogen trains, based on the Coradia Polyvalent range for Régiolis platform. In the Netherlands, after testing the fuel cell hydrogen train in 2020, which highlighted the success of these new vehicles, the province of Groningen received approval for EIB financing for the purchase of four trains and the installation of a recharging station.
While the Austrian government approved the Coradia iLint hydrogen train after three months of testing, Italy ordered six hydrogen fuel cell trains from Alstom with an option for eight more vehicles. Last year, Japan also entered the hydrogen era in rail with the announcement by JR East Hitachi and Toyota Motor that they have partnered up to design and build a hydrogen-electric train to lay the foundations for a new generation of rolling stock.