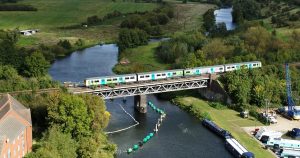 Network Rail and Porterbrook plan to showcase HydroFlex train at the UN Climate Change Conference of the Parties (COP26), which will be held in Glasgow on 1 – 12 November 2021..

The collaboration will bring a ground-breaking hydrogen–powered British HydroFlex train that has been converted to include an ‘on-board boardroom’giving COP26 invited guests the chance to use the train to support the globally significant discussions that will take place.

It is envisaged that the HydroFlex may also be used to transport visitors to see the Zero Emission Train, Scotland’s first hydrogen powered train.

“I’m delighted to announce we are hosting this exciting train at COP26. Rail is already the greenest form of public transport and we want to show our commitment to running an even cleaner, greener railway and playing a vital role in helping tackle climate change. To do this, we’re working in partnership with Porterbrook, an innovative British company who have developed green technology with tremendous export potential,” Network Rail’s Group Safety and Engineering director Martin Frobisher OBE, said.

This unique fringe event will give guests, including leaders and climate experts, a first-hand experience of British technological innovation and expertise, and how alternative fuel trains of the future will play a vital part in building back better and greener from the pandemic, Network Rail says.

In addition, Network Rail is also in the earlier stages of planning a similar event with Vivarail to bring an operational battery train to COP26.

In 2020, Network Rail became the first rail company in the world to commit to the most stretching science-based targets for reducing carbon. A key part of the strategy for achieving those targets is decarbonising traction energy by powering trains with alternative fuels, notably further overhead line electrification and the introduction of hydrogen and battery trains. The Science Based Targets Initiative, backed by the United Nations, has independently verified company’s targets, and plans to achieve them.