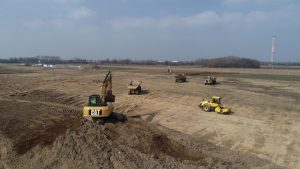 Hupac has launched the construction of a transshipment terminal in Brwinów near Warsaw which will extend on an area of nearly 14 hectares. The terminal project comprises a storage yard of 42,000 square metre, four transshipment tracks with a minimum length of 750 metres, and administrative facilities. The containers will be operated by reachstackers.

The terminal is expected to enter operation in the third quarter of 2022 and will be the first intermodal terminal of the Swiss company in Poland.

In the second development phase, three more transshipment tracks will be constructed and added to the rail system, as well as high performance gantry cranes. The maximum capacity of the facility is limited to 180,000 intermodal units per year (TEU).

After the completion of the construction works, the terminal will offer rail / road transshipment of intermodal loading units as well as additional services such as storage, warehousing and last-mile trucking.

The terminal has a strategic location as it is situated near Warsaw and will benefit great rail connection and direct access to the A2 motorway running to the German border.

The new transshipment complex will handle cargo both on long–distance routes and the last mile delivery.

The transshipment terminal aims at enabling an efficient exchange of goods in Central and Eastern Europe, which will facilitate the intermodal transport between China, Russia and Europe by rail.

In 2015, Hupac established the Hupac Terminal Brwinów with office in Warszawa, which is responsible with the planning and building of the new terminal for combined traffic in Brwinów.