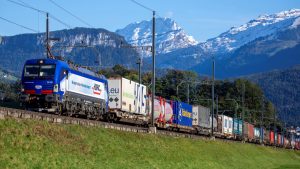 After a strong decline in transport volumes especially in transalpine transport to Italy due to coronavirus pandemic, Hupac has announced the recovery of freight traffic. The main reason for the slump, which peaked at minus 50%, was the extensive closure of industrial production by the authorities. But the gradual easing of regulations helped Hupac network to increase again and is presently at a level of minus 25% compared to the planned traffic volumes.

Hupac advocated that rail freight transport and the terminals should be recognised as systemically relevant and should not be closed even in the event of lockdowns, in order to maintain a secure supply of essential goods. This contributed to the fact that Hupac’s offer was always open, even during the phase of national border closures.

As the road combined increased due to the drop in diesel prices during the corona crisis, effective measures are needed to support combined transport in order to prevent a shift back from rail to road. As a result, Switzerland intends to provide greater support for transalpine combined transport with the subsidies already at its disposal, and Italy grants discounts on train path costs in favour of railway undertakings.

“We expect further measures to reduce the fixed cost burden of the combined transport operators also from Germany as the most important market and central European transit country. Temporary additional track access charges support as well as subsidies for rolling stock that cannot be used in the crisis would provide relief and counteract a clear-cutting of offers in rail freight transport. Without appropriate support, combined transport operators would be forced to reduce their network, which would trigger a dangerous downward spiral in modal shift,” Michail Stahlhut, director of Hupac Intermodal, said.

Since February 2020, the corona crisis has presented the company with extraordinary challenges, but the recovery of freight traffic is expected to take place within the next period.” The company is financially healthy and has secured additional financial liquidity in view of a longer crisis scenario. We expect a gradual recovery of transport volumes throughout,” said Hans-Jörg Bertschi, Chairman of the Board of Directors of Hupac.

In 2020, Hupac developed its product portfolio despite the corona crisis. Daily connections on the Rotterdam – Melzo and Novara – Pescara routes for P400 trailers were integrated into the network and a shuttle train took off between Perpignan and Cologne for P400 trailers, a ground-breaking innovation for the Spain/South France market.

A daily feeder service on Geleen – Moerdijk route with further connections to the UK and Italy started operations, while an improved operational concept between Stabio and Aarau was implemented for domestic traffic in Switzerland.

ERS Railways was able to add the Bremerhaven – Regensburg and Bremerhaven – Frankfurt connections to its service in April. At the beginning of May, the new business unit Landbridge China launched a shuttle service between Xian in western China and Warsaw in Poland with connections to Hupac’s European Shuttle Net.

In 2019, Hupac Group shifted more than 1 million truck consignments from road to rail for the first time, with an overall number of transports increasing by 10.5%. The growth was partly due to the acquisition of ERS Railways in 2018, which last year was consolidated in the Hupac Group for a full year for the first time.

Hupac was able to expand its strong position in combined transport with a transport volume increasing by 2.8%, to 551,042 road consignments and thus contributed to reducing the number of road transports through Switzerland.