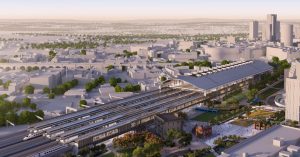 The process on the selection of HS2 signalling and control systems contractor has been launched, with a total combined estimated value of GBP 540 million (EUR 610 million). Shortlists are set to be announced next year with contract award around 2022.

The contract covers the design and construction of the signalling systems that will control trains travelling at speeds of up to 360 km/h between London, Birmingham and Crewe, where HS2 trains will join the existing West Coast Mainline. The contract also includes the provision of technical support for a period of 25 years.

The control, command, signalling (CCS) and traffic management (TM) systems contracts will require the winning bidder to deliver the work which includes the design, manufacture, supply, installation, safety authorisation, testing, commissioning and maintenance until handover to trial operations of the Phase One and Phase 2a CCS & TM systems.

The HS2 signalling and control systems contracts also envisage a potential extension of the Phase One/2a TM system to cover Phase 2b comprising two parts, the eastern and western leg. The eastern leg runs from the West Midlands to Leeds with connections to the Midland Main Line and ECML (East Coast Main Line). The western Leg runs from Crewe to Manchester and will also join the WCML (West Coast Main Line).

The CCS and TM systems provided on HS2 will use the European Train Control System (ETCS) signalling and the latest traffic management technology.

“Our state-of-the-art command and control systems and traffic management systems will allow HS2 to offer fast, frequent and reliable low carbon journeys for millions of people every year,” said David Poole, the Procurement and Commercial Director of HS2 Ltd.

This tender follows the recently launched process for the track systems contract envisaging civil work, including tunnels, bridges and viaducts.

Phase Two will extend the route to Manchester and Leeds, by adding more than 335 km, through 24 km of tunnels, and on 45 km of viaduct.

Once operational, HS2 will serve over 25 stations.