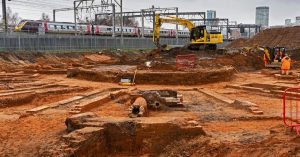 The search process for HS2 track systems suppliers has been launched involving the delivery of 280 km of high speed track as part of the first phase of HS2 project. The winners will also take a lead role in managing and coordinating the complex interfaces between the track and other elements of the rail systems.

The new contract opportunities cover the design and build of the complex track systems between London, Birmingham and Crewe, where HS2 trains will join the existing West Coast Mainline.

“Rail systems are some of the most important parts of the HS2 project – the high tech equipment and systems that will allow our trains to deliver an unparalleled service in terms of speed, frequency and reliability,” HS2 Ltd’s Procurement and Commercial Director, David Poole said.

The contracts covering rail, switches and crossings and pre-cast slab track systems will be awarded separately, with the HS2 track systems suppliers coordinating the design and installation.

The start of the formal procurement process for this first set of rail systems contracts marks an important new phase in the HS2 project, with the winning bidders set to arrive on site once the tunnels, bridges, viaducts and earthworks are complete.

Six more sets of rail systems contracts are due to be launched later in the year, covering signalling, the overhead catenary that will provide power to the trains, mechanical and electrical systems, high voltage power supplies, communications systems and the depot and control centre at Washwood Heath in Birmingham.

The plan envisages four separate track packages, of which three are relating to the Phase One, while a package (Lot 4) includes the track for Phase 2a, with a value of £431 million (EUR 488.7 million).

To reduce long term costs and improve performance, the track will be set onto concrete slabs instead of the ballast commonly used on the UK rail network. This approach, known as slab track, is commonly used on metro systems and some international high speed rail lines, and will allow for a higher frequency of service with less maintenance.

By the end of this year, the shortlisted companies will be unveiled and in 2022 the contracts will be awarded.