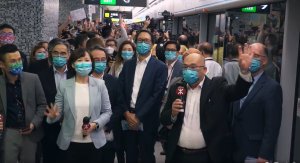 MTR has officially launched the East Rail Line cross-harbour extension in Hong Kong with an inaugural ride on a special dedicated train from Exhibition Centre station to Hung Hom station.

With the commissioning of the extension, passengers travelling from Hung Hom station to Exhibition Centre station will travel only 5 minutes.

With 16 stations along a entire route, the extended line connects  the old terminal at Hung Hom station to the new terminal at Admiralty Station, via the new Exhibition Centre station. The East Rail Line (EAL) passengers will be able to reach the commercial, convention, exhibition and financial hubs in the Wan Chai North and Admiralty areas without having to interchange, significantly reducing their journey time.

Siemens Mobility equipped CBTC at 16 stations on the East Rail Line, while also modernising and expanding the railway network by 6 km and 3 additional stations. The radio-based technology enables real-time data to be captured on vehicle position and speed conditions. This allows the East Rail Line to safely accommodate an increased number of vehicles on the line at a greater frequency. Additionally, the upgraded digitalised system provides the ability to continuously receive updates on system status which improves operational efficiency, resulting in fewer delays and more up-to-date travel information.

Along the entire line and its cross-harbour extension, the Airlink solution provided by Siemens Mobility has been installed for radio transmission, and automatic train supervision is realized through the operations control system. Electronic interlockings and Trainguard MT (TGMT) Wayside Control Units have been installed for efficient train control. Eventually, a total of 37 passenger trains and 22 locomotives will be equipped with the TGMT on-board computer units (OBCU). The new system is controlled and monitored by the Operations Control Center in Tsing Yi.