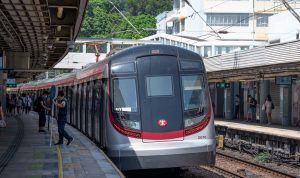 MTR has launched the trial operations on the 6 km East Rail Line (EAL) cross-harbour extension performed in non-peak period of the traffic hours and some non-traffic hours. The train runs are a trial for the commencement of passenger services on the EAL extension, targeted in June or July this year.

The trains will pass through existing EAL stations via the new platform at Hung Hom station to the new Exhibition Centre station and the future EAL terminus at Admiralty station.

The start of trial operations is a major project milestone, signifying readiness to extend the EAL service from Hung Hom to Hong Kong Island.

The railway construction works have been substantially completed, with new trains being delivered to Hong Kong and put into service progressively.

In this trial operations period, the operations team will ensure railway systems, facilities and staff are fully prepared to deliver a safe and reliable passenger service. Major aspects of trial operations include running train services and station facilities, final train trial running, and drills and exercises.

As part of these trials, is expected be minor train service changes on some sections of the EAL during the entire process.

The East Rail Line cross-harbour extension will link up the Northeast New Territories, Central Kowloon and Hong Kong Island with 4 interchange stations connecting five railway lines. The city’s railway network will become more comprehensive, providing a green commuting option to passengers. With the new extension, the East Rail Line will become the fourth cross-harbour railway line which will be 46 km long with 16 of which 4 are interchange stations.