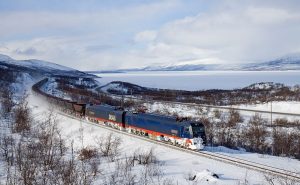 Hitachi Rail and the Swedish Transport Administration Trafikverket signed an agreement to roll out its ERTMS level 2 signalling system on the vital Malmbanan Arctic circle section, within the frame of country’s national programme of railway digitalisation.

Under the contract, Hitachi Rail will provide the ERTMS level 2 base line 3.6 systems and the related equipment to upgrade the third section of the single – track line, between Gällivare and Boden.

Hitachi Rail will deliver the signalling technology for a 140 km – long line, including 14 stations as well as technical buildings.

“We are very proud of Trafikverket again showing it´s confidence in Hitachi Rail and our contribution to the modernisation of this vital northern line. Further to that initial step, Hitachi Rail will be prepared for the same for the upcoming initiatives for the remaining core network to be upgraded by 2030 – mainly ScanMed East and ScanMed West corridors,” Eric Morand – Head of Nordic region said.

In 2019, the Swedish Transport Administration started a three-year programme to resignal the entire  Malmbanan railway line with estimated costs of SEK 3 billion (EUR 296.8 million). The project involves the replacement and reduction of the number of the interlockings which are more than 50 years old, and the deployment of ETCS.

The resignallisation works have started on the Gällivare – Råtsi section of Malmbanan line and are performed by the Sweden-based Eitech Engineering, acquired by Vinci Energies in 2017. The interlocking replacement and installation on this section is expected to be completed in 2022.

Bombardier Transportation has been awarded a contract to install the ERTMS Level 2 on the line covering the supply of its Interflo 450 ETCS Level 2 system.

In 2008 Hitachi Rail started the collaboration with Trafikverket through the Ester framework and started to deploy the ERTMS technology on Haparandabanan as ERTMS pilot line.

The Malmbanan or Iron Ore Line runs 398 km from Riksgränsen, in Kiruna Municipality, Lappland (Northern Sweden), and Boden in Norrbotten, the northernmost county of Sweden.

The heavy haul line comprised two branches one from Kiruna to Svappavaara and the other one, from Gällivare to Koskullskulle.