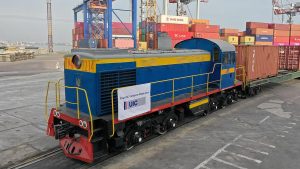 Hamburger Hafen und Logistik AG (HHLA) has established the Ukrainian Intermodal Company (UIC), its own intermodal company in Ukraine which offers container transport by rail between the Port of Odessa and the important economic centres in the country.

Starting October, UIC offers weekly block train connections between Odessa and Ternopil in the Lviv economic region in Western Ukraine. In November, a weekly service to the industrial centre of Kharkiv, the second largest city in the Ukraine, will start operations. It is also planned to establish a weekly container train connection between Odessa and Zaporizhia in the east of the Ukraine.

The future plan is to expand the offer of regular rail connections to other Ukrainian production and consumer centres and increase the frequency of services.

At the Port of Odessa, HHLA operates the Container Terminal Odessa (CTO), the largest container handling facility in Ukraine. The terminal has its own rail terminal, which is currently being expanded and where the container block trains are formed. All inland activities are carried out in cooperation with private rail terminals. Additional services such as stuffing and stripping of containers, hub-to-door delivery to the destination by truck or customs clearance are also available.

With the new company, HHLA has taken the first step towards a stronger modal shift from road to rail. The rail system offers several advantages as the existing broadgauge network optimally connects the largest inland economic centres with the Ukrainian coast. In comparison, large parts of the road network need modernisation works. Furthermore, due to the large distances in Ukraine, the rail transport is best suitable to be a sustainable way to transport goods.

Together with local partners HHLA intends to remove obstacles to rail transport in Ukraine, and to establish and market a reliable range of services.

Up until now, container transport by rail in Ukraine was almost exclusively carried out using individual cars or groups of wagons. The newly established Ukrainian Intermodal Company bundles the individual loading to container block trains, increasing the efficiency and reliability of the transport services.