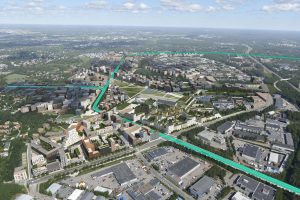 A new LRT in Helsinki was proposed by the city municipality under a recently unveiled master plan to develop transport network in the North-East. The Viikki – Malmi LRT will offer transport connection from the city centre to Kumpula, Viikki, Latokartano and the Malmi Airport area, and on to Malmi or Jakomäki. The route plan and the preliminary stop placements are displayed in the Kerrokantasi service, and they can be commented on until 14 June.
The Viikki-Malmi light rail line will be connected to Helsinki’s current city tram line, and it will be part of the regional LRT network.

For the Viikki-Malmi light rail line, two route alternatives are currently analysed at the northern end of the section, one of which would go from the Malmi Airport area to Malmi station and the other one to Jakomäki. The route alternatives are not mutually exclusive, but they are likely to be built at different times, depending on the development of land use along the light rail line.

The LRT will be connected to the current city tram line and also be linked to the future Jokeri light rail and the three future planned tram lines such as Tiederatikka (Science rail), Jokeri Light Rail 2 and the Vantaa tram.

The new LRT in Helsinki will provide increased accessibility to public transport services and will reduce travel time. The project will facilitate the construction of new housing, jobs and services relying on the tram line network and along its alignment. The area of effect of the light rail is estimated to encompass 86,000 residents in 2050, as well as 65,000 more jobs than currently.

The goal is to increase the market share of sustainable modes of transport along the route and within the city.