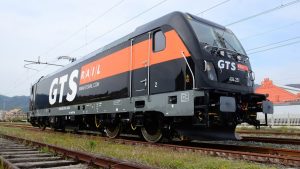 The Bari-based intermodal rail freight company GTS Rail and Alstom signed a contract for the supply of 20 new Traxx DC3 locomotives, which in Italy are known as the E.494. EUR 74 million is the value of the contract which represents the most important order in GTS Rail history, the operator says. The first locomotives will be delivered from the beginning of 2024.

This new order brings the number of Traxx DC3 – E.494 locomotives in GTS Rail’s fleet to 33,  8 of which are equipped with last mile function, for a total of 45 Alstom locomotives, including Traxx DC2 – E.483.

One of the most interesting features is the possibility to equip the locomotive with last mile function, allowing new operating concepts through which the locomotive can be used on non-electrified lines, often found in ports, industrial areas or terminals. The agreement signed for the supply of 20 locomotives includes the option to purchase last mile function according to GTS Rail’s discretion.

The four-axle locomotives will be manufactured at the Vado Ligure (SV) site, which has more than one hundred years of experience in the design and construction of locomotives including the latest generation of Traxx electric locomotives. The site is a centre for production and maintenance of rolling stock and subsystems.

The procurement of Traxx locomotives marks a milestone for the rail freight operator since through GTS Iberia will enter the Spanish and Portuguese rail market. GTS Iberia will ensure the freight flows from Spain and Portugal to the markets of the United Kingdom, Belgium, Italy and others. The company intends to transfer large volumes of goods from the road to the railways, thus supporting, thanks to electrical technology, transport at zero direct emissions.